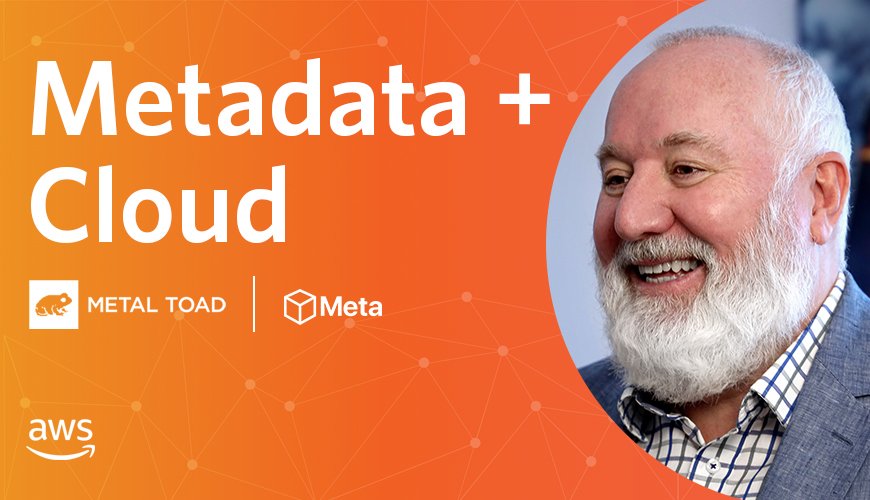 Shaun McCarthy has decades of experience as a senior executive in the tech field, with a focus on startups, operations, marketing, and sales. He is an industry expert when it comes to creating value and building relationships with stakeholders. In his current role as general manager at Meta, he oversees operational excellence and guides strategic vision for the company.

In this interview, Shaun McCarthy and I chat about metadata, metadata collection, and what he sees for the future of the industry.

Q: So for those who are not familiar with Meta, can you give us just a brief overview of the company?

A: Meta was really an evolution from the work Rob Tucker (the founder and CEO of Meta) was doing as a consultant in the media and entertainment space. He was working with various organizations over a number of years, and he identified a significant gap in the metadata and the collection of metadata associated with various content catalogues. As a result, he developed the platform that provided much more efficiency for those organizations to control that part of their supply chain.

Q: And then how did you get involved with the company?

A: Just over 12 months ago, I had some interactions with Rob, and Meta being a small company at that stage, even though it has grown now, I could see there needed to be some more input into the business itself.

The idea was to allow Rob to focus on the things that he’s really good at. He’s done a fantastic job with the platform; he’s a brilliant designer and problem solver. For him to be able to do that and free him up, there needed to be someone coming in and putting in place all the basic hygiene factors of running a successful business. Everything from HR to legal to employment contracts to management contracts to customer contracts, etc.

Q: That makes total sense. As a founder myself, I’ve found that bringing in great people is super important. So, we’re here to talk a little bit about the AWS and cloud space. Can you talk about how Meta got connected with the cloud? Has it always been involved in the cloud?

A: It has, actually. And right from the word go, Meta had a very close partnership with AWS and the cloud itself. The product is a totally modern platform. It’s API-first, and the relationship, with not only the cloud integration, but also with AWS itself, has been a very close one.

Q. They are great partners. If you were to say where your company fits into the media and entertainment ecosystem, where are the pieces that people should think about with Meta, when they’re thinking about M&E?

The application was designed to make it simple and easy for the users, and we’ve brought in a lot of functionality from various other suppliers in the supply chain to allow that consolidation and enrichment of media catalogues.

Q: I know that metadata is huge.

A: It certainly is. We’ve added functionality and features to the product over the last two years—and continue to do so. All that development is very much customer-led. And as the requirements have changed, and as the customers have applied the platform, they themselves have seen other opportunities to create more efficiency. They’ve fed that back to us, and we’ve responded—and the Meta platform has evolved as such.

Q: Yes. And break out your crystal ball for us: what do you think the impact of the cloud will be on the media and entertainment industry over the next three years?

A: It’s an interesting question, because I don’t have a tech background, and I don’t have a background in media and entertainment—but I do have a business background. And I must say, I was really blown away by how flexible AWS is in their interactions and how much they support, particularly, the startup organizations; they assist them to come in and innovate—and provide opportunities for them to develop and provide new products.

Not having been exposed to this industry previously, in some of my old business interactions, the cloud was talked of as something like, “that new thing that no one would ever actually use or trust.” Because some of the organizations I worked for had their traditional big IT infrastructure—lots of servers with fail-safe storage and backup systems, etc...massive investments. But those things become very limiting as well because to change things and improve and innovate, you’re stuck with this massive tech debt, and how do you get over that?

So in my opinion, I see the cloud as representing the democratization of technology in many ways. It’s low cost, it’s fast and flexible, and it’s secure. You don’t need a massive upfront investment in bricks and mortar. It’s removing completely over-supplied and over-engineered systems and, going forward, should allow more efficiency and innovation to occur.

Q: Yeah, the theme of democratization and enabling even smaller businesses to develop the same technology that, previously, only large companies with that CapEx capability could have—that’s been a common theme.

Are there any cloud technologies, other than yours, of course, that you’ve heard about or read about, that you find especially interesting?

A: Again, not being the technocrat, there’s a number of systems we use. Weka.io, for example—I don’t know if you’re familiar with that business. But in the integration layer of the platform, they’re doing some really interesting work in transforming businesses with automation. They take out a lot of the complexity—which is all adding to efficiency and improvements and encouraging innovation.

I saw an article or a post or something by yourself recently, Joaquin—I think there’s some really interesting work going on in facial expressions. Melinda Ozel is doing something with that. And I think that type of technology has got the potential to play a massive part in the entertainment industry, in the future. But, equally, I think it needs to be understood exactly what can and can’t be done in that space.

Q: Yes, that’s interesting. Certainly from a catalogue management standpoint, when you can detect anything, the question is: what’s useful?

Q: We’ll have to follow up on that. We’ve managed to avoid talking about this so far, but what do you think the impact of the coronavirus will be on the media and entertainment industry over the next 12 months?

A: Well, I think it’s going to be significant. To be honest, I don’t know that anybody knows or could provide a realistic answer to that question.

In fact, I just got off a call, and we were talking about that exact point. It seems as though a lot of streaming organizations and so forth, their revenues are up about 10%. They’re doing quite well from it, because everyone’s staying at home and consuming more content.

But that’s not going to be sustainable because the people that are paying and consuming that content—a lot of them are going to be out of a job the longer this goes on. I think, overall, the global industry is down about 10%. So, that’s the production, where people just aren’t able to get on and provide a lot of that service.

Equally, I think there’s positives and negatives in everything. This coronavirus, the impact of it is really major. Where it stops, no one knows, but in my mind, I liken it to—it’s got the same impact as a world war.

If you look at World War I and World War II—they were horrible events, and we never, ever want to see an actual World War III where people are fighting in the streets. But this global pandemic, it’s been fought like a war because countries are closing down. People are hunkering down and not working and not consuming at the same level. I really think, out of that, there will come innovation. There will come technical progress, and we will end up with probably a cleaner and leaner world. But exactly how that manifests itself, I really don’t know.

Organizations are going to have to adjust to less revenue, less staff. A lot of staff don’t want to come to work anymore, which I think is going to be an issue. And to be very honest, I think cloud technology and cloud tech is perfectly placed to benefit from that—because as the impact of coronavirus really hits the financial markets, that is all going to trickle down to every piece of the puzzle: every player in the market and everybody in the supply chain. I really think cloud technology is in the prime spot to benefit from that.

Q: Indeed, indeed. If somebody wanted to get in touch with Meta, what would be the best way to do that?

A: The best way to do that is to visit our website: www.meta.how. We have an inquiries line there, and there’s also quite a bit of content and video that can be consumed that gives you a good background on exactly what the organization does. And you have the ability to leave your name, phone number, and email address—and we’ll be back in touch with you very quickly.