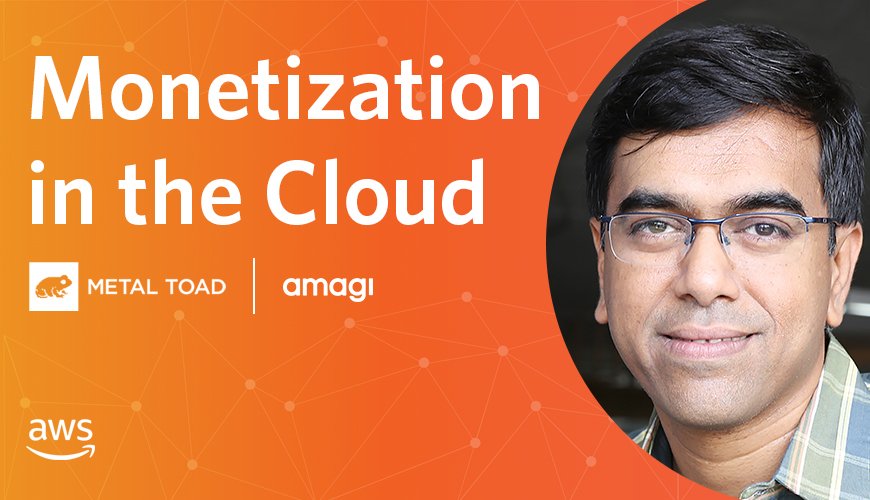 Monetization in the Cloud

Srinivasan KA has been a leader in the tech industry for over two decades. He began his career as a software engineer and founded a wireless audio company in the late nineties. In 2008, he co-founded Amagi, which helps content creators distribute and monetize their content.

In this interview, Srini and I chat about monetization, the cloud, and what he sees for the future of the industry.

Q: For those who are not familiar with Amagi, could you walk us through what you guys do?

A: Amagi is a media tech SaaS company. We work with content owners, sports rights owners, television networks, and broadcasters to help create, manage, distribute, and monetize their content. Their content could be 24/7 linear channels that they’re delivering to broadcast or for OTT—or it could be on-demand VoD content or a live sports event.

We provide an end-to-end platform and a managed service to help all of these networks and content owners make money off their content. We work with 400-plus television networks globally, including some of the largest names in the business.

Q: And how did you get involved in the AWS cloud space?

A: That’s a good question. We are a cloud-born company. We ran our first cloud-based automation about ten years back. That’s the first cloud solution that we built—essentially to help automate localized ad insertions from the cloud; manage all the local ad insertion from the cloud.

So we work very closely with AWS. We’ve been with them forever—and, again, you want the cloud-native component, so everything has been built optimally for the cloud. We use a mix of things—and obviously, everything is Docker containerized, Kubernetes orchestrated—so it’s a mix of Spot Instances, microservices, and Reserved Instances to optimally orchestrate the entire playout and automation.

Q: I know that’s a huge issue for a lot of companies, trying to figure out how to monetize the content that they have, and VoD is a huge part of that project. Are there any other cloud technologies—since you’re in the cloud, you’ve been in there for ten years—are there any other cloud technologies that you’ve heard about that are either in play or you find especially interesting?

A: A lot of new stuff keeps happening in the cloud. Cloud by definition allows a lot more innovation; people can try things that otherwise would have been very expensive to try in the first place.

Often some of the biggest innovations we have seen have been through a combination of AI and cloud, whether it’s for extracting metadata out of cloud, doing automated closed captioning, and even subtitling using cloud technologies—essentially AI on cloud.

More recently, due to COVID, we have seen a lot more innovation in cloud production—primarily cloud-based production for sports and news that was always done on-prem. Those are the big ones that we have seen.

Q: Yes, it’s interesting. You mentioned COVID, and that’s always a question to me in an interview—is it going to come up organically? Are we going to mention it?

But since you did, what would you say the impact of COVID would be? What do you think it’s going to be in terms of the media and entertainment industry over the next 12 months or so?

A: COVID has clearly increased media consumption in a totally unprecedented way, right? We’ve seen consumption go up by 200-plus percent across a number of platforms.

Obviously on the CTV side, we have seen a massive increase in terms of viewership, fueled by a lot more time spent at home and a number of the free ad-supported offerings—like the ‘Pluto’s, ‘Xumo’s and the ‘Samsung’s of the world—as well as launches from large networks like NBC Peacock, HBOMax, and so on.

A combination of all three have dramatically increased overall media consumption. On the flip side, obviously, theatrical releases have come to a standstill; production has slowed down significantly. I do hope over the next twelve months, a lot of these will get back on track.

But given the large consumption habit that has been kickstarted due to COVID, I think it’s going to be great in terms of the next twelve months for the overall media and entertainment industry—and specifically focusing on CTV.

We think a lot of ad dollars are going to shift from traditional TV to Connected TV—a sort of OTT platform—and we do hope to play a pivotal role there.

Q: So you’re doing advertising monetization for your customers as well?

A: Absolutely. We have seen that over the last six months, it’s grown by close to 600 percent.

Q: Oh wow. It’s fascinating when you look at the new players—and I say “new,” but new in terms of starting to see advertising online for Pluto TV or Tubi or Peacock, a huge free player—the question is, who’s going to pay for it.

I think advertising will come back in, but it’s interesting to see. We’ve had that Netflix subscription model for a long time. The VoD has been there for a while. I think people are very used to that with iTunes and whatever else you might be using. You have the Amazon Prime—sort of that freemium model.

It’ll be interesting to see where those habits go. Certainly there is, to your point, a huge increase in the amount of streaming, and the market has really massively increased in size.

A: The next three years, that’s an excellent question—thought provoking. Cloud in general always meant innovation, right? I mean, it allows you to have a lot more agility as a business to experiment more and to try out or provide options to consumers that never existed.

Traditionally—especially if you look at the traditional TV networks and broadcasters—they have been imprisoned, if I can call it that, by systemic constraints in the business dictating what the technology should be doing. It has been the technology that has been dictating to the business what they can do—I can do only so much of CapEx, and there's only so much processing that I can do, and so on.

I think cloud is essentially liberating a lot of these networks from those technology constraints. So you’ll see, first and foremost, you will see a lot more agility, a lot more flexibility in terms of options that are going to be made available to the consumers as SaaS. And that’s going to lead to innovation in terms of how we produce content, how we manage content, and how we consume content overall.

I think we are in this video 1.0 world. I mean, it’s very preliminary, basic—video has been produced pretty much the same way, from 40 years back, and it is still produced and consumed in a similar fashion.

I think we’re getting to—and hopefully cloud will enable this—a lot more interlinked, social, interactive video consumption that does not exist today. And I think the combination of AI, 5G, and cloud is really going to be a big game changer. I think three years from now, video will look very different from what we are seeing today.

Q: Yes, good point. Final question: if people want to get in touch with you, what’s the best way to do that?

A: The best would be email, which is kas@amagi.com. The company address, cloudandme@amagi.com, is the company contact email.