Agile Versus Waterfall, Once and For All

As we race towards the date of my presentation at this October's Digital PM Summit, I'm working to crank out the remaining posts in my series that started after I first presented on the topic of growth at Drupalcon Austin. This seventh post touches on one of the biggest debates of the last decade in digital and software project management: Agile versus Waterfall. In my presentation I purport to "solve" the debate in two slides. This post will give a bit more context to those two slides!

First off, let's get a common misconception cleared up; Agile is a philosophy about software development, not a model for a process. Agile is a manifesto...

We are uncovering better ways of developing
software by doing it and helping others do it.
Through this work we have come to value:

That is, while there is value in the items on
the right, we value the items on the left more.

- Customer satisfaction by rapid delivery of useful software
- Welcome changing requirements, even late in development
- Working software is delivered frequently (weeks rather than months)
- Close, daily cooperation between business people and developers
- Projects are built around motivated individuals, who should be trusted
- Face-to-face conversation is the best form of communication (co-location)
- Working software is the principal measure of progress
- Sustainable development, able to maintain a constant pace
- Continuous attention to technical excellence and good design
- Simplicity—the art of maximizing the amount of work not done—is essential
- Self-organizing teams
- Regular adaptation to changing circumstances

... that provide a cohesive perspective on how software should be developed. There are several popular models (including Scrum and Kanban) and a handful of other lesser-known options that attempt to embody Agile principles in a process, but those do not fully define Agile, and some stick to the manifesto better than others. In the opposite corner, Waterfall is a model for the process of software development. It brings with it no manifesto, no principles. That said, as a process Waterfall fails a number of the Agile principles (no surprise given that a goal of the Agile manifesto was to discredit Waterfall), so Waterfall implies in some cases the opposite principles.

Given this, you can compare Agile and Waterfall in one of two ways:

Software development breaks from decades of traditional wisdom around project management. Most industries (Construction, manufacturing, etc.) need processes that are very linear. Some phases of a linear project will happen concurrently, but by and large, one step follows another. The steps are all defined and have been done by a hundred other companies. Waterfall can be great for this type of work. On the other hand, software is often the anti-manufacturing. It's the act of learning. Of discovery. Of starting something without the end result being clearly defined. Of iterating until the problem gets solved. Given that, it makes sense to break down large problems into smaller problems so that the end result isn't either "we solved the problem" or "we couldn't figure it out" but instead wind up with "we were able to figure out about 90 of the 100 sub-problems making up the one big problem!" So common wisdom in software development is to avoid tacking a big problem and instead view the same project through the scope of lots of little problems tackled separately. Sounds pretty Agile, right?

It's All About (Un)certainty

When you approach the beginning of any project, a standard practice in defining what's to be done is to identify the problem(s) to be solved. Those problem statements will lead to user stories, tasks, specifications, and definition of all the other chunks of the project to be completed. Sometimes the stakeholders have an incredibly clear idea of the problems they're looking to solve, while other times they have only the vaguest notions of what they'd like to do. You might frame that as the stakeholder group's combined level of certainty about the project. Often certainty in web projects comes from answers to a number of questions:

Answering these questions allows you to judge where the project falls on the spectrum we in the PM world like to refer to as the Cone of Uncertainty. The cone presents a really simple concept: as a project evolves, uncertainty decreases. If you look at the moment just before conception of a project in the original stakeholder's head, it is the purest form of certainty; the thought of it doesn't even exist yet to have any definition. The far opposite end of the project is completion, where everything is done, so there's nothing left to be certain about. Throughout the course of a project, uncertainty may vary slightly on a day-to-day basis, but the trend will always be towards decreasing uncertainty. 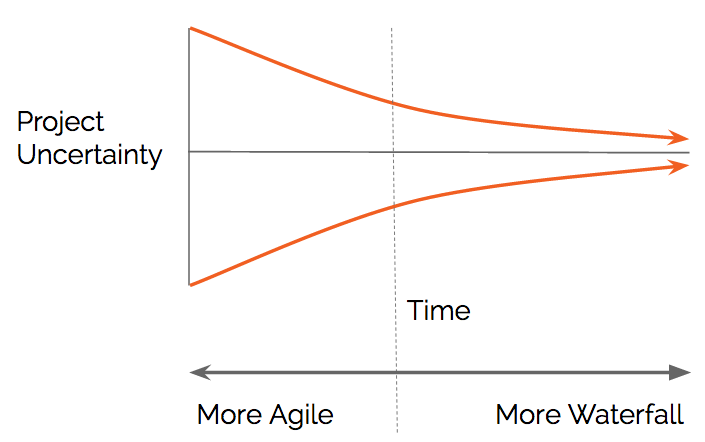 And now, what you've all been waiting for: the answer! Agile versus Waterfall decisions should be based entirely on the level of project uncertainty. If enough (or all) of the problems to be solved are known and unlikely to change before the project's completion date, then uncertainty-based risk is low, and Waterfall may just be the most efficient way to get to the finish line. If problems are vague and/or the goalposts are changing, then Agile is a no-brainer. The question for your organization to answer for itself in all of this is how much uncertainty risk you are comfortable bearing as a rule. While I advovate for determining process on a per-project basis, I think uncertainty risk threshold is something that should be defined organization-wide in general terms, so that those selecting the approach for a specific project can use the proper selection critera provided by organization leadership.

As we've grown, Agile (Scrum) has increasingly taken hold at Metal Toad. That's not just us buying into the Agile hype. It has been a natural progression based on our project size growing in parallel with our organization size. Three years ago, our projects were small enough that uncertainty was low; project durations were short, scopes were well-defined to the feature level before projects kicked off, and the number of stakeholders involved was small enough that decisions were clear and usually didn't change. Not surprisingly given those constraints, we often relied on something looking more like Waterfall to complete projects. Today's scenario is a bit different; we have 6+ month durations on many projects, and discoveries to get the team and external stakeholders on the same page are a way of life. Uncertainty is high, and that's great by us! We still do have some smaller projects that skirt the low/high certainty threshold, so for that reason we maintain a few core criteria that help us make the decision whether to lean Scrum or waterfall:

Interested in the topic of organizational growth from a PM perspective? Join me and a bunch of fellow PMs at the 2014 Digital PM Summit in Austin this October! I'll be presenting a talk similar in nature to my Drupalcon presentation and related to this blog series, but new and improved after additional months of experience and iteration. The Bureau of Digital Affairs did a great job with the inaugural 2013 event, and 2014 promises even more in store. With a great lineup of speakers, topics, and of course after-parties, you'll definitely get your monies worth. I hope to see you there!

I am really looking forward to seeing your session in Austin.

I think this is really well stated. A process like Scrum is designed for complex projects where you don't know exactly what the client needs or how you are going to provide it. If what you are doing is a known, repeatable thing... maybe back to the waterfall with you.

I think there is also an additional level of differentiation. At any given company, the culture may also push the needle to either side of the Agile/Waterfall debate. In a traditional approach, the primary focus is on the schedule. The PM uses the "resources" at his her disposal to make the thing happen, ideally on schedule, in scope and in budget. In an Agile approach, the primary focus is on the Team. A ScrumMaster's primary responsibility is to support/protect/enable/helpbecomemoreawesomer the Team of people who do the work. The thinking is that, if you take care of the people, they take care of the work.

And at the end of the day, coffee is for closers, nobody gives you a bonus for being agile, you have to deliver, and and there is no spoon.

Agreed that culture has a significant impact on where the decision to use Agile or Waterfall lies. We've found Agile a compelling way to break free from fixed scope while still committing to timelines, and it has helped us preserve budgets in the process. That said, the client education impact on profitability can be huge when the time involved just to keep an Agile process running creates significant time overhead.

Thanks for the thoughts!

It is so good to have this great one stuff.