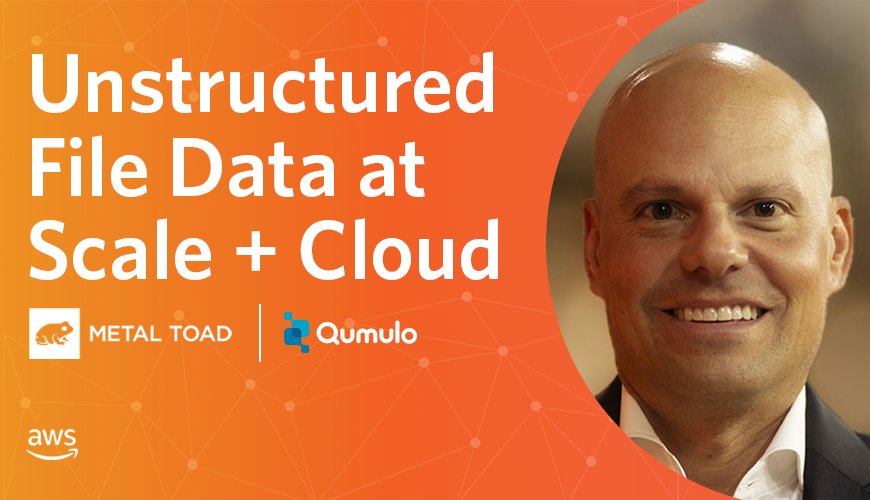 Barry Russell has been at the forefront of the cloud since 2008. He led the development of the AWS Marketplace and AWS Service Catalog P&L businesses from day one, taking them to $1.5B in revenue in six years. Today he heads the rapidly growing cloud business unit for Qumulo, including its strategy, revenue, business development, partner ecosystem/alliances, digital sales, and go-to-market execution.

In this interview, Barry and I chat about advances in managing large amounts of unstructured file data, the cloud, and what he sees for the future of the industry.

Q: For the people who don’t know much about Qumulo, tell us about your company.

A: Qumulo has been in business for several years. We’re a high-growth software company based in Seattle, Washington— we help customers do some pretty incredible things with large, petabyte-scale unstructured file data. In fact, this summer we closed an E Round of funding that put our valuation right around $1.2 billion, which we’re super excited about. It’s just going to enable us to build new product and drive even more of what our customers are asking for. So, that’s our core focus: unstructured file data.

Q: Congratulations—that is impressive! And wow, all unstructured data. How did you get involved in the AWS/cloud space?

A: Well, I started in cloud kind of generically—I sort of fell into it when I was working at Microsoft back in 2008. Then I joined Amazon—AWS specifically—in 2012 to build and then run their AWS Marketplace, which was their B2B software store. And I did that for many years.

I also ran and built out another service for them called AWS Service Catalog. That got me into the whole growth and explosion of public cloud and how customers were using that across their private environments. It’s been a fun journey since 2012.

Q: That’s cool. I had no idea about the history with the Marketplace. I have a whole other list of questions I'm sure I could ask you about, but let's stick with Qumulo. Tell us, how does your company fit within the media and entertainment ecosystem?

A: Media and entertainment is really where our product took root. We’ve been working with everybody from major production studios in Hollywood, to large streaming service providers, to networks—and even the firms that do pre- and post-production editing. We’re really in the space of animation and broadcast, and even post-production visual effects, or VFX. And one area that’s growing super fast for us is gaming. We’re working with a lot of the large gaming producers in helping them with their production of new games and getting those out to market faster.

A: Yes, there are a few. If we move outside of the M&E space—into automotive (particularly autonomous driving) or a large consumer electronics manufacturer, for example—both of those industries are collecting unstructured file data. Oftentimes, organizations in these industries are pulling that data up to the public cloud—pulling it up to a cloud provider like AWS, utilizing their IoT platform, Greengrass, or even pushing the data through their AI engine, SageMaker, to create models.

And so we’ve found a lot of adjacent partners—for example, in the metadata tagging space, which requires AI. We’re even working with a company that is looking at managing the actual models that are created, because those are also getting a bit unruly in terms of the number of models created from all of this unstructured data that’s being generated. So a short answer to your question is: edge IoT and AI are two areas we are particularly interested in.

Q: Interesting. And what do you think the impact of cloud is going to be on business over the next, say, three years?

A: Well, it’d be hard for me to predict. I wish I could do that!

But look, what we’ve all faced the last seven or eight months has really shone a light on businesses that are able to operate from a screen, to operate digitally, or that have transformed non-digital to digital-based applications and services for their customers—across all industries. I think that’s the acceleration point.

I think that all enterprise customers, and even government agencies, have realized that their longer-term digitization plans just got hacked in half, and they need to get on it—and make that happen in the next couple of years. Otherwise they face a certain population not being able to use them—and certainly competition coming into the market to take their place. That’s the focus.

Q: Yeah. I couldn’t agree more. And if we do look at the near term and the impact of the coronavirus, what effect do you think it’s going to have on the media and entertainment industry over the next 12 months?

A: Well, what we’re seeing is an acceleration in the production of content. I think part of that is because people have been stuck at home, so they are consuming a lot more digital content than they might have been consuming before.

But for the people in the media and entertainment industry, particularly those who need to do editing, clean-up, and pre- and post-production work on content—whether it’s movies or shows, or, frankly, even videos that an enterprise produces—where in the past they might have been able to be in person…the impact is distributed workers.

And the reason cloud is so important when using a file system like Qumulo is that by running software in the public cloud, we enable all of the compute power that those editors and artists would have had on-prem—now they have it in the public cloud. So they're able to do it from their home on their laptop and their screens. And that’s the key.

And I think that trend is going to continue for a while. We’ve seen several companies already say that they're fine with their employees working from home for a longer period of time, or even permanently. The cloud becomes much more important when you have a distributed workforce of editors and artists.

Q: Yes. We went full remote in 2019, and it’s been interesting as we’ve added people— not only across the United States and in Canada, but also in Brazil, and now we’re looking to Europe. So, that distributed workforce certainly resonates for us.

If somebody wanted to get in touch with you over at Qumulo because they wanted to learn more, what’s the best way to do that?

A: Well, they could reach out to me on LinkedIn, I do check that regularly, or they can email me at brussell@qumulo.com.

I love having conversations with folks about what they're seeing in terms of trends with the enterprise. I think we’ve got to keep our eye on this unstructured file data space. It’s an area that’s been a bit overlooked in public cloud, but now it’s starting to explode—and there's just so many cool things customers can do with this data. It’s awesome to see them doing it.