The Digital PM Summit took place earlier this week in Philadelphia, Pennsylvania. Two great days of listening to speakers and mingling with attendees later, I came away extremely pleased with the inaugural event and already look forward to next year. There were many great highlights, and not surprisingly given the project management background of Brett Harned and the summit team, things were extremely well planned and executed. Below are just a few of the highlights from conference sessions!

On The Digital PM Role

"I found my people!"

This and numerous variations on it were heard uttered or seen tweeted repeatedly by attendees. Digital Project Management is still new and increasingly important, and it was extremely satisfying to be in a room full of others who could all relate to the triumphs and tribulations inherent to the role.

"Check your ego at the door. As a PM, your goal is to make the project shine by pulling the strings in the background rather than seeking the spotlight."

This was me! I'm thankful I had the opportunity to present a lightening talk which briefly touched on retention of the PM role. This specific line and the implied goal of staying humble are both critical to getting team buy-in and support. Without that support, no one will be happy, and you'll likely be out, whether by your own doing or not. 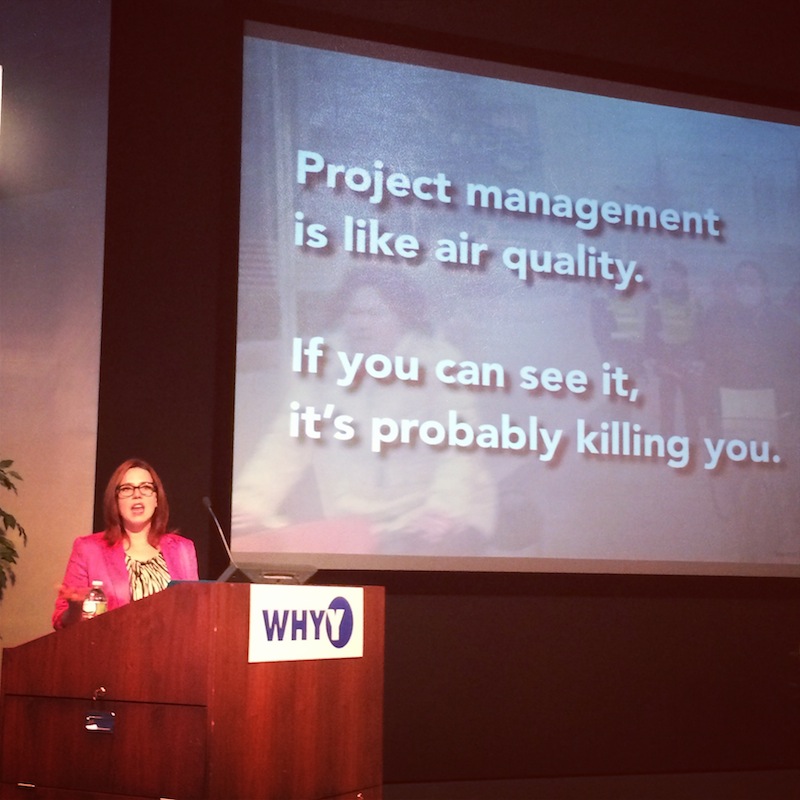 "Project management is like air quality; if you can see it, It's probably killing you."

Meghan Wilker and Nancy Lyons had a compelling presentation on embracing chaos when it comes to process as well as the traits and soft skills required of a PM. It reflected my successful PM blog post series (particularly the post on traits) well. I agree with this particular quote wholeheartedly. It relates closely to my view on process and the grace with which the best project managers get things done. Great PMs can "wrangle", "fight fires", and embrace "chaos" with what looks to an outsider like the greatest of ease.

"Boredom comes from figuring the problem out."

Michael Lopp gave a great presentation which included some talk about how to team individuals engaged in an organization. He touched on how many people tire of a specific position or role in 2-3 years, and a key to long-term retention is to provide new challenges and roles for the members of your team. That 2-3 year window is generally the right amount of most people to "figure the problem out" or master the common tasks and responsibilities to the point of boredom.

Brett Harned gave a great talk on being a better PM. Here he referenced an unfortunately common lament from developers and creatives across the industry. Good PMs are out there, but there aren't enough of them, and the bad PMs cause a lot of damage to the role's credibility. A major goal of the summit was to bring together great PMs and share ideas to boost the credibility and skill of the role industry-wide.

"Give a volatile the choice between a $20 and $30 toaster, and they pick a flying toaster."

In the same talk referenced above, Michael Lopp focused on two types of roles in teams: stables and volatiles. Not surprisingly, most PMs lean more towards the "stable" role, or people who a) work well with direction, plans, and schedules, b) play nicely with others c) assess risk and avoid drama, and d) tend to generate process and documentation of what works. Volatiles, on the other hand, a) define strategy rather than following it, b) cannot conceive of failing, c) find thrill in risk, d) don't build stable or predictable things, and e) are reliable only when it's in their best interest. A team needs both to survive. Without volatiles, stables will structure their way into irrelevancy, and without stables, volatiles will spin out into chaos. I see this as a spectrum with dangerous extremes at both ends. People may be more one than the other, but the roles can change; Michael noted the tendency of volatiles becoming stables to protect their work when new volatiles arrive.

On Sales and Business Development

"Don't start your project with a risk."

Multiple presenters (including Brett Harned specifically quoted above) advocated for PM involvement early in the sales cycle to both provide better customer experience and alleviate risks of misselling or overselling. It was great validation of a need I identified early on at Metal Toad. When the attendees were asked if they were involved in their agency's pre-sales process, nearly all hands went up.

And along those lines…

"Overselling is a false economy."

Sam Barnes gave a talk from the client perspective and his learnings when he became the horrible, demanding, frustrated, terrible client. He emphasized honesty as a differentiating factor and empathy as a selling point. He also acknowledged that agencies with a tendency to oversell are doing the entire industry harm by forcing increased overselling to compete between agencies. The ability to fight the trend and sell projects grounded in reality comes from repeated honesty and integrity across projects, which will in turn bolster your agency's reputation significantly when you manage to deliver to the realistically set expectations.

"Have a Pause Clause in your contracts. Create a rule that to be a stakeholder and decision-maker on a project, client team members must be at the project kickoff meeting."

These ideas from Carl Smith and Rachel Gertz respectively sound great in theory. The pause clause allows for a project to be put on hold if a client misses a deadline and restarted at the agency's discretion. The stakeholder rule aids project timelines and the end product significantly by steering clear of decision by committee. To me, neither feels fully respectful of the client's needs or particularly grounded in reality. Client timelines need to shift, and decision by committee is an unfortunate but not uncommon thing. If you choose to steer clear of selling projects involving lots of stakeholders, great! But all partnerships require some give and some take. Plus in my role as a project manager, if things get to the point where the contract needs to be invoked, I've failed.

"Scrum is designed to work on projects that border on chaotic."

Dave Prior gave a talk entitled "Scrum in the Waterfall" which focused on both benefits and drawbacks to agile process within agency/client relationships. He acknowledged that agile is not right for all projects. If the project is well defined, another methodology makes sense. Agile and Scrum are founded based on the idea of controlled chaos within software and web development. Be wary, if you're approaching a project which looks like chaos, you're putting yourself at risk from the start of the project from a budget/timeline/scope perspective.

This great remark came from Dave Prior's presentation as well. It gets at the idea that the more time a PM can dedicate to a project, the more successful the project will be. There is always additional strategy definition, project communication, and task management time which could be invested by the PM. As an agency, the trick is finding the right balance of ample time per project for your PMs while respecting budgets and the overall project load compared to available project managers. There's always more mastery of a single project to be had, but there is a point of diminishing returns where extra time invested in the project produces smaller and smaller additional benefit.

"Ask clients to do homework assignments."

This tactical gem came from Carl Smith. He advocated for "homework" (which in many cases is additional planning or requirements gathering) by clients in situations where the agency needs to delay. While the delay isn't ideal, additional planning will always benefit a project. This could be chalked up to nothing more than a stalling tactic, but the reality is that an agency's project resourcing is never perfect, and delays happen.

On Client Relationships and The End Product

Brett Harned reinforced the notion that mistakes happen, but as long as the team has the client's best interests in mind, stay honest, and come up with solutions, recovery from those mistakes is almost always possible.

Jeffrey Zeldman gave a great talk, and this highlight reinforced the notion that shipping is the ultimate goal and clients need to be on board with getting something out the door (which is often easier said than done). While QA and bug squashing is important, the big picture goal of creating something unique, new, and exciting but possibly not perfect is always preferable to something polished but boring. 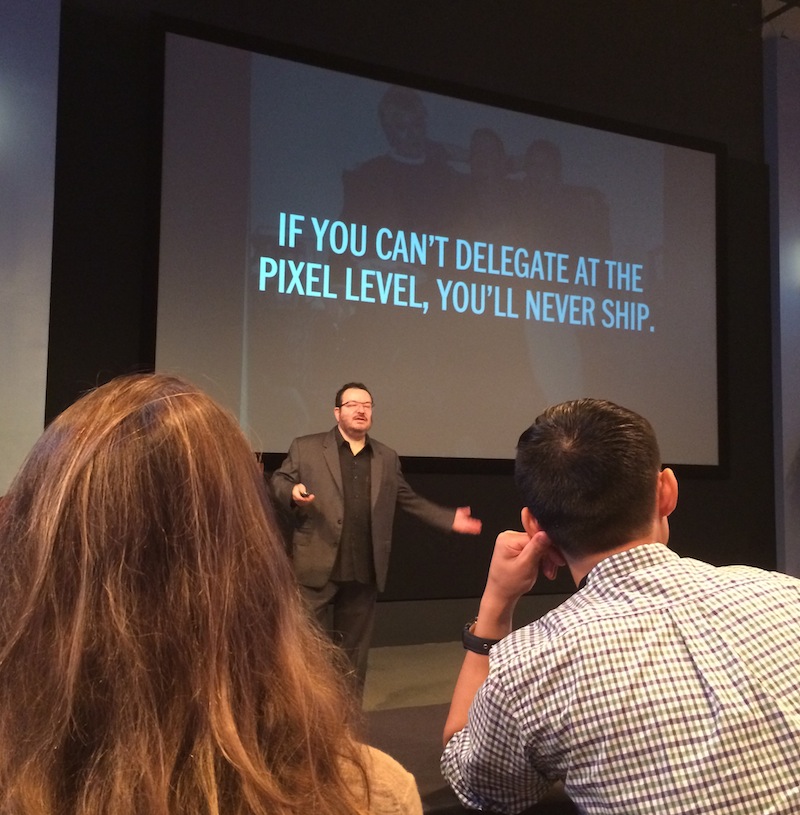 "If you can't delegate at the pixel level, you'll never ship."

Again, Jeffrey Zeldman hit home with the dangers of micromanaging, particularly on the creative side of things. Micromanagers can be clients, project managers, creative directors, or any other number of roles. The main concern? If there's not a clear delegation of authority and autonomy for team members, projects will inevitably spiral, leading to something far less than magic.

Carl Smith made a great distinction between must-win clients and checklist clients. The former are clients who have skin in the game and want to take ownership over their project, while the latter are often handed a project assignment and don't have the want or need to put sufficient energy into the project. Given the ample amount of time required on the client-side of a project to get to the finish line, choosing must-win clients is the only strategy to reliably get the client buy-in you need for success.

"Our clients and teams need us to win."

Rachel Gertz made the great point that while client-PM or PM-internal team relationships can feel like us versus them, it's important to have the whole team understand and acknowledge either everyone wins or everyone loses together. Everyone winning includes the PM as the glue holding things together and balancing the needs of the client and agency to get to a completed project with everyone happy.

Thanks to the Bureau of Digital Affairs for organizing one of the most memorable conferences I've attended. I found myself inspired and motivated by the summit sessions, after party, and related networking. The attendees were a group of smart, ambitious, and genuinely friendly individuals who all had a lot in common. I learned some new strategies, found solace in the woes and horror stories of my fellow PMs and team leaders, and encountered a good deal of reinforcement in my hope that Metal Toad is already doing a great job with numerous areas of project management. On the whole, the summit had the right intangible energy, making it more meaningful than it might look on paper. As the summit looks to grow and expand next year, I hope it's able to maintain the same energy.