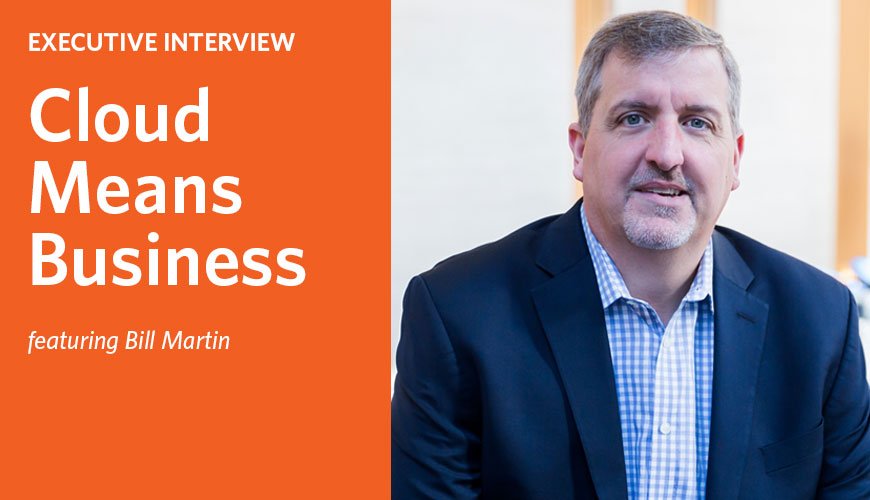 An Executive Interview with Bill Martin, CIO of AEG Worldwide

I’ve been chatting with some of the execs I admire—from across a range of industries—to get insights on how they’re using cloud technologies and what it means for their business success—now and in the future.

As CIO at sports and music entertainment giant AEG, Bill Martin drives the convergence of business and technology to deliver innovative success. He’s focused on assessing the landscape and seizing on process and technology opportunities to construct high value business enablers.

Bill and I got together to talk about how businesses are actualizing the promise of the cloud, the new innovations delivering business value, and the necessity of embracing change every day.

Q: What do you think the impact of the cloud will be on business over the next five years?

A: I think we're going to see a lot of catching up in leveraging the cloud. One reason I say that is, here at AEG, we finally unplugged the last piece of equipment in our data center just last December. We're now completely out of the data center—we don't run one anymore. We do have small “data closets” in the buildings—networking gear and things like that. But we don't run any of our application systems from a central data center anymore. It's a huge milestone. And what we’re already seeing—and something that’s been getting better and better over the last couple years—is that our agility and ability to respond to the business has dramatically improved.

Not only that, the tool sets that we can give people to work with are much more readily available. If somebody wants to develop a new application system or bring something in from a third party, there’s no procurement process to figure out—how much equipment, how much storage, how much of this and that. Now we can stand it up ourselves or it's going to reside in Azure—and we could spin that instance in an afternoon.

But I do think a lot of businesses are struggling to get there. At AEG, we were uniquely positioned to move quickly because we don't own our primary selling system—tickets are sold through Ticketmaster and AXS. So that provided a unique opportunity for us to accelerate the transition to be totally in the cloud. As other companies are able to progress and get there, I think it's going to have some really dramatic impacts—especially for larger corporations, because they're the ones that are really struggling to transition, because there's so much legacy infrastructure to deal with. When I go to summits and talk to CIOs from different large companies, they still talk about the amount of legacy stuff they've got.

Q: Yeah, I definitely hear that too, and I think your take on the next five years being a sort of actualization is very interesting.

A: Exactly. No one’s questioning whether the cloud is the right move. The conversation is now about how to get there.

Q: So you mentioned Azure. I know you guys are pretty closely tied with Microsoft. Are there any other cloud technologies that you've heard about that you find particularly interesting ?

A: I think the collaboration space is undergoing some really interesting development. This is a very recent phenomenon—we didn’t talk about Slack or Zoom or Microsoft Teams three or four years ago, and now that stuff is integrated into our day-to-day work, and it’s so much easier to collaborate. We have a number of people that are remote, but when we do a staff meeting, they're in the room. It's fundamentally shifting how people get work done—and how effective it is to get work done.

This kind of collaboration has been second nature for developers for a while now, to some degree. But now it's starting to find its way into the rest of the business—the marketing people, the sales groups, even finance and HR. In fact, our HR team is one of the biggest users of Microsoft Teams—for instance, they’ll create exclusive teams for the recruiting of a particular person and just really leverage the utility of the platform to collaborate better.

And the technology just keeps getting better, better, better. It all leads to more efficiency, too. We use Microsoft Teams all the time at AEG, and it has dramatically reduced the number of emails—real emails—in my inbox on a daily basis, because people can just communicate directly in these spaces and ask the questions they need and get answers in real time.

Q: What criteria have you used in evaluating the cloud vendors your company uses?

A: Well, more than criteria, in my opinion, is sticking with the big guys. We use Microsoft services a lot, but we’re also working with AWS. Our AXS ticketing company is a very large Amazon customer. Their entire ticketing stack is built in AWS managed services.

Q: What advice would you give to CEOs everywhere in regards to emerging technology?

A: I think there are two areas execs need keep an eye on. First, pay attention to 5G. It's not quite ready yet, but when it is, it's going to have a pretty dramatic impact on how businesses think about connectivity. We're going to run a POC this year with one of the carriers, transitioning one of our offices off of the corporate network, and having every device mobile enabled so that it's just on the mobile network. Because we’re now 100% cloud based, the only reason people would need the corporate network is to get to the internet. But why should we build significant corporate network infrastructure just so people can use the internet? We're talking about putting 5G SIM cards in laptops and desktop devices to allow people to be constantly connected. Instead of building a corporate network, we may put some repeaters for the cell signal. And that's it, that's our network.

We actually use a similar strategy when we do Coachella out in the desert. We work with all of the carriers to prop up and supplement their network infrastructure so that everybody has connectivity. That's always a big challenge when you put that many people in the desert.

The other emerging technology to watch is AI. I've been on the sidelines for a while when it comes to AI. But my wife has a Tesla, and I see how much smarter that car gets with every release. With everything Tesla’s learning from the hundreds of thousands of cars that are sending data back, they're getting smarter and smarter about how to drive that car. So far, the focus has been mostly on machine learning; it hasn't really been artificial intelligence in the most by-the-book definition of what artificial intelligence truly is. But I think we're getting close to machines being able to actually come up with solutions, not just pattern recognition. It may be a few more years, but we're getting really close—it just feels different.

Q: What advice would you give to people working in technology today?

A: Learn. Never stop learning! Because the technology is constantly changing. In fact, one of AEG’s strategic goals for our operations group is helping all of our business users continuously learn about all of the changes that are coming. We have all kinds of productivity tools at our disposal—and because they're cloud based, they're constantly changing and improving. So a key question is: how do we change our methods of educating business users so that they understand all the tools they have at their disposal?

Q: Yes. Change management for humans became the bottleneck in innovation at some point. That's a recurring theme when I talk to CIOs. I hear people saying that disruption is now coming for the tech users themselves—they’re used to disrupting, but now they’re being disrupted and having to adapt.

A: Right, that is absolutely the case. And the pace of technology advancement isn’t going to change—it will keep coming. You probably read the book Who Moved My Cheese?—I think I read it like 10 years ago. But now it's more like the cheese is in a different place every day. It’s no longer the case that we encounter rare occasions when we have to go through a large change management project. Things are changing every day, so you've got to constantly be learning.