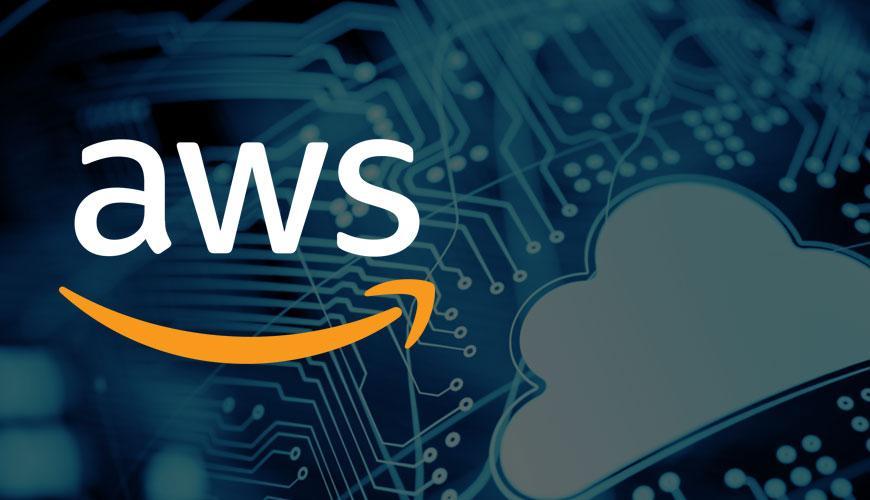 Setup a NAS on AWS

by Nathan Wilkerson , Director of Engineering
Filed under:

As part of Metal Toad’s Managed Services Team, I have worked extensively in custom cloud based solutions. There is no doubt Amazon Web Services (AWS) leads the pack in Cloud hosting, but when it comes to a Network Attached Storage (NAS) solution, I have found a shortfall...a fast solution.

Simple Storage Service (S3) is AWS’s file solution to NAS, and it is a great system, but without refactoring our code to serve the images directly from S3, we are left with using the S3 Fuse Driver which responds slowly when serving content.

One could also argue for the use of Elastic Block Storage (EBS), and it solves the issue of slowness when using S3. But EBS is unable to be mounted on multiple EC2 machines, essentially defeating the purpose (NAS needs to be shared).

When searching for a solution, many “How To’s” recommend a program called GlusterFS as a NAS storage solution on AWS. It is a software package that is fast and replicates data between machines. However, I am never satisfied taking other people’s word for “the best solution”. So, I decided to test Gluster against some of the other NAS options offered for AWS.

The tool I decided to used for the test is called IOZone. It is an older tool with many positive reviews on multiple many forums. IOZone allows you to test different file sizes, record lengths, and io options. The IO options range from read, write, random read/ random write, backwards read, and lots more.

I wanted to see the whole gambit of tests so I ran iozone -A. The ‘-A’ is a flag that gives a wide range of record lengths and files sizes. We ran the test for files up to 512MB but the data in the graphs is capped at 8MB because 99.9% of our files are smaller than 8MB.

The IOZone definition of tests:

Write: This test measures the performance of writing a new file. When a new file is written not only does the data need to be stored but also the overhead information for keeping track of where the data is located on the storage media. This overhead is called the “metadata” It consists of the directory information, the space allocation and any other data associated with a file that is not part of the data contained in the file. It is normal for the initial write performance to be lower than the performance of re-writing a file due to this overhead information.

Read: This test measures the performance of reading an existing file.

Random Read: This test measures the performance of reading a file with accesses being made to random locations within the file. The performance of a system under this type of activity can be impacted by several factors such as: Size of operating system’s cache, number of disks, seek latencies, and others.

Random Write: This test measures the performance of writing a file with accesses being made to random locations within the file. Again the performance of a system under this type of activity can be impacted by several factors such as: Size of operating system’s cache, number of disks, seek latencies, and others.

Below are the straight up comparisons of speeds for the tests we’re interested in. 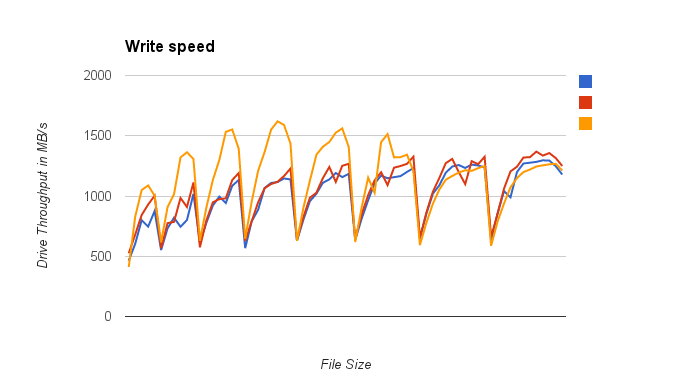 Here we see that Zadara is better at Write Speeds on smaller files, though they even- off as they get larger. Winner: Zadara. 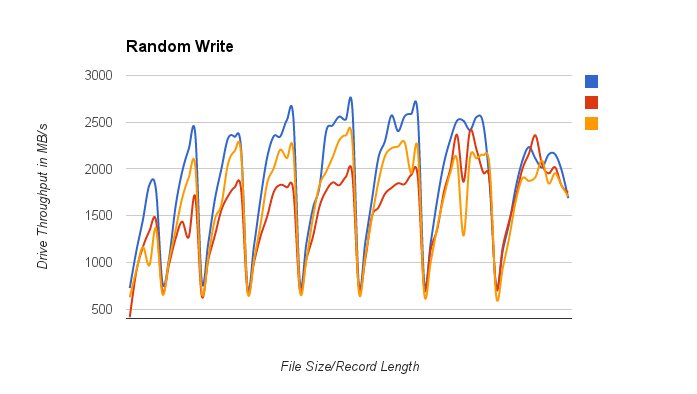 For Random Writes we see all of the solutions perform better as the record length gets bigger but Gluster clearly outperforms all of them. Winner Gluster. 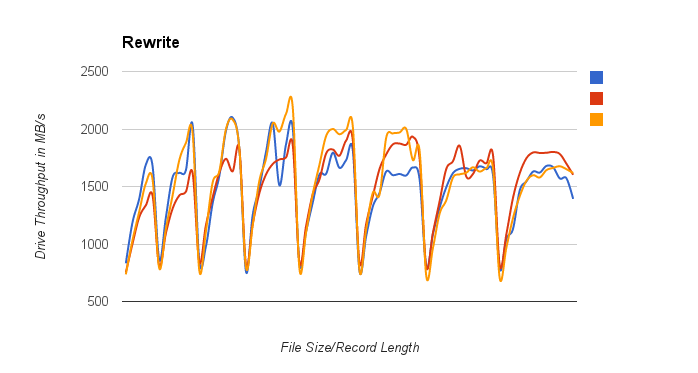 Rewrite is a much closer write then the random or straight write test. I would call this a tie between Gluster and Zadara. 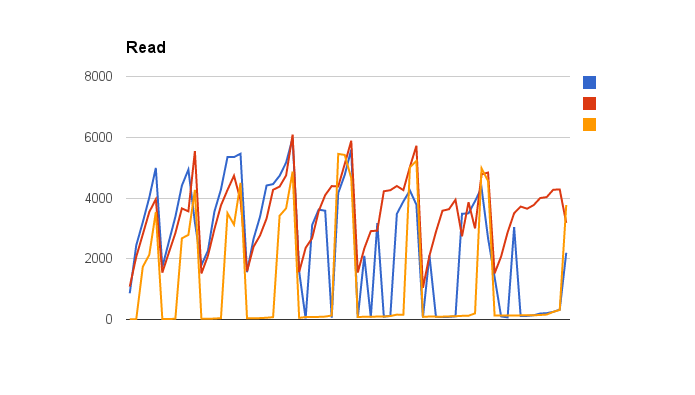 Read tests: Zadara performed much slower with small record lengths and once the file got larger then a 1MB Gluster started slowing down. Winner: SoftNAS. 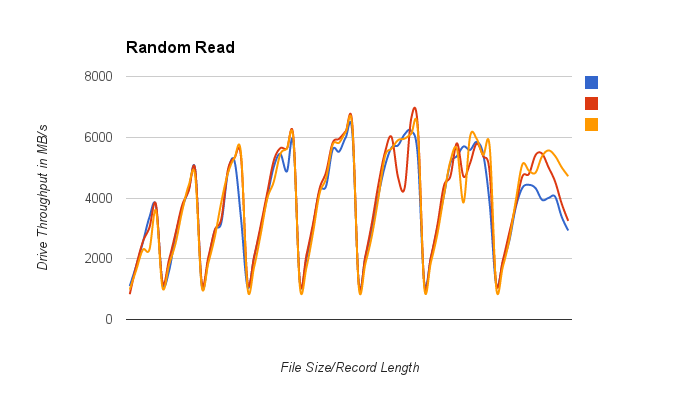 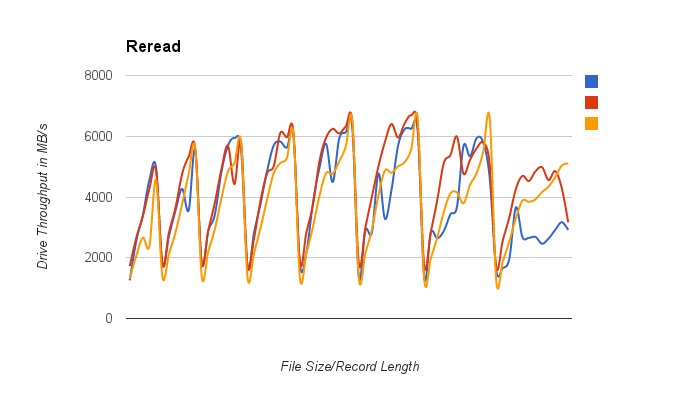 Reread is very close once as the record length grows, but the for smaller records lengths SoftNAS has better record lengths.

Since SoftNASperformed marginally better at reads and Zadara was better at writes I wanted to get a better look to see the differences between them. 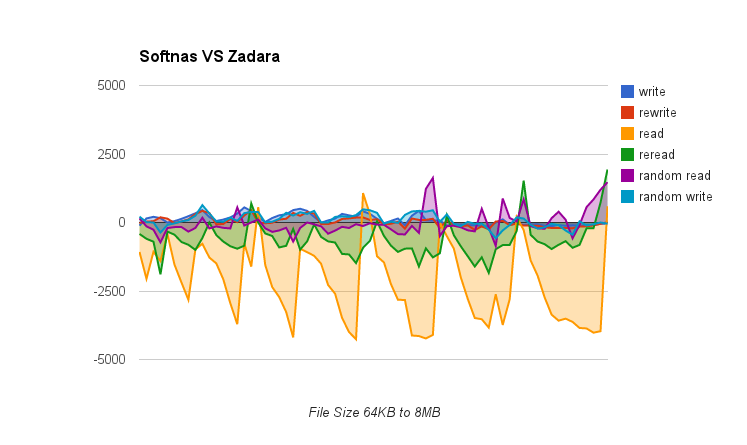 As you can see, the write is slightly better towards Zadara but the reads are extremely fast for Soft NAS. Our primary use for the NAS would be to server static files to various web servers, so read speed is a big plus.

The IOZone ran files sizes up to 512MB but I couldn’t get GlusterFS to finish without the NFS mount hanging.

As I mentioned above, the graphs stopped at 8MB because of what we used the servers for, but when the file size made it to 128MB the Write speed for Zadara greatly out- performed both SoftNAS and GlLuster.

Gluster is best for quick setup and reduced cost since it can run on the same instance of its server, though it can be bogged down if the server load gets too high.

Zadara is great if you need the added security of having dedicated drives, or if you have a right intensive application.

Pick the one thats right for you.

Thanks for the wonderful research
Very useful