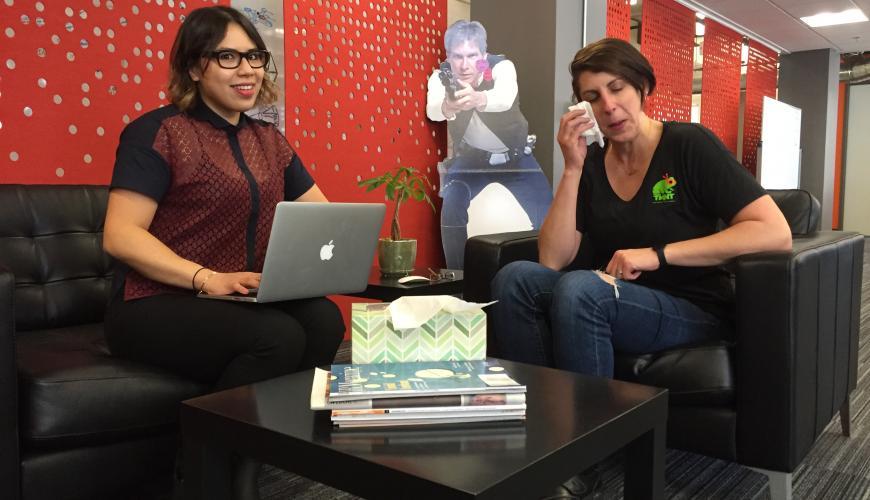 As Metal Toad’s Director of Project Management, Hayli Hay’s got her hands full.

In addition to managing the Project Management team, she works with everyone in the company ranging from our designer, Rachel, to our founder, Joaquin. Juggling projects and people management, she’s unabashedly one very involved Toad. Fellow Toads may see her on a daily basis, and Metal Toad blog readers may have read her posts, but do you really know Hayli Heins Hay? During this interview with (full disclosure) my boss, I reveal some of Hayli’s deepest secrets, spanning from her favorite La Croix flavor (coconut) to why she got into project management in the first place (TL;DR: natural talent). Get to know Hayli beyond the hip asymmetrical haircut and bright colored attire, and be one step closer to learning one of the ingredients of Metal Toad’s secret sauce.

MU: Let’s start off with a few warm up questions — where are you from, and as a child, what did you want to be when you “grow up”?

HH: I grew up in Sartell, Minnesota. When I was a kid, I wanted to be a teacher but in high school I decided I wanted to be a forensic photographer. I looked at different colleges to pursue forensic studies, but my fear of chemistry kept me away. I did end up going to college (the first time) for photography, but realized I didn’t really have a talent for being behind the camera. What I did figure out is that I loved the pre- and post-production of photo shoots.

MU: Well that confirms my suspicion that kids don’t really grow up dreaming of becoming a project manager (PM)! Most people you meet in Portland these days are not actually from Portland — what’s your Portland migration story?

HH: After I finished school in Minneapolis in 2000, I moved to Los Angeles to live the life of glitz and glamor in the photo industry, which I did. In 2005 I met my now husband (who also works in the entertainment industry) and we moved up here in 2007 for the film "Coraline." I sold my business in L.A. and moved up here without knowing a soul and practically site unseen.

MU: Like so many of us non-native Portlanders, it sounds like you moved up here to start a new chapter of your life. What's your favorite thing about Portland?

HH: This has changed for me a lot over the years depending on what’s currently going on in my life at the time but in general I like how easy and accessible Portland is in terms of getting around town using a variety of methods of transportation and getting out to nature. Spending seven years in L.A., going camping or going to nature was such an ordeal. Here it’s literally with a 30-minute drive and I really value that.

HH: While living in L.A., I owned a business called Logic Organizing. I was a professional organizer for estates, businesses, and yes, even some A-listers. At the time, I thought I made up the profession, but as it turns out, I was practicing Lean, Six Sigma, and general project management methodologies. I didn’t truly identify as a PM until about six years ago. I never really thought of it as a profession since it’s how I work, live, and what I always do. Through coaching I received at my last job, I realized, accepted, and embraced the fact that I was a PM. It was a career field that I wanted to be in and could grow in. Even though I consciously chose this path, I’ve always been doing it. It’s funny because no kid is ever going to tell you they want to be a PM when they grow up like they would a doctor or fireman. That’s what I really like about project management, you can come to it your own way.

MU: Now a question for all the aspiring project managers out there who don’t even know yet that they want to be a PM: What is your single most important piece of advice you would give to an aspiring PM?

HH: Let your work ethics shine through, and the rest will just come. I am always the most impressed by people who produce high quality work, and as for more, are continuously learning, and doing whatever it takes to get the job done regardless of other circumstances. If you work hard, do good quality work, and produce good results, the jobs start pouring in — people will ask for you specifically to join their projects and teams. PMs have the power to build their own reputation based on their own quality of work and work ethic. It’s been decades since I’ve looked for a job because my work speaks for itself.

HH: The pace is incredibly fast at a digital agency. A lot of industries think they’re operating at a fast pace, but this is really fast. Client expectations are different from previous industries that I’ve worked in and things can change hourly here. Part of my job as director is to minimize the impact those changes make on the rest of the team.

MU: In either slower or faster paced environments, what do you find most fulfilling about being a PM?

HH: I love taking a project that could be very stressful and deliver a product on time, on budget, to a happy client with a proud team. I strive to make the journey from A to Z within a project a smooth one for everyone involved. When that happens I’m immensely fulfilled.

MU: Who do you think is most critical for ensuring your success as a PM?

HH: Yourself. People who are PMs are usually type A, self-managing who have bosses who trust them to do their thing. A micro-managed PM is a terrible thing.

MU: Our project management vision statement at Metal Toad is “to ensure success.” What do you think is most critical for ensuring your project’s success?

HH: Simply put, plan your work and work the plan. Make sure the awareness level of what’s going on is high, which is typically achieved through communication. PMs have a decent amount of control over a project; they need to master when and which levers to pull at any given time.

MU: Short and sweet, but to the point advice. What do you wish someone told you when you first started your career in project management?

HH: That you can’t be a bull in a china shop. There’s a balance of how much you can push people versus what you might break when doing so. When I was first starting out, I used to occasionally aggressively push people. I tried to make them care about something that they didn’t care about. A PM needs to have a balance of when to step on the gas and when to ease up on the team. Emotional intelligence goes a long away and is something that i’m always working to improve.

MU: Sounds like you’ve come a long way. What qualities do you admire in a good leader?

HH: Honesty, trust, and knowing that he/she has my back.

HH: Ten years, wow! I was hoping you would ask me about where I see a certain project at the end of quarter two because I could actually tell you that. In ten years I see Metal Toad as a very well-known name in the industry working with the best and biggest companies. My personal goal is to help get Metal Toad written about in Fast Company magazine — because we do things differently here which is why our growth and innovation has been so extreme lately.

MU: Lastly, what is something about you that not many people know?

HH: To a lot of Angelenos, I am known only as Stabitha. I played banked track roller derby for the L.A. Derby Dolls for five years and that was (is?) my skate name. 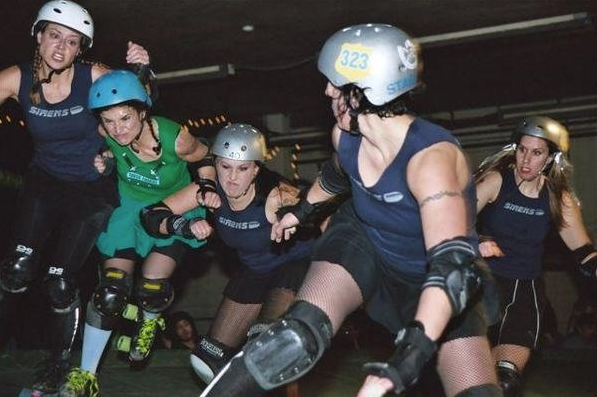 And there you have it, Metal Toad’s Director of Project Management, Hayli Hay: project management guru by day and roller derby demon by night.

Great interview!  And a fun way to get to know the Toads better.  I hope to see more!