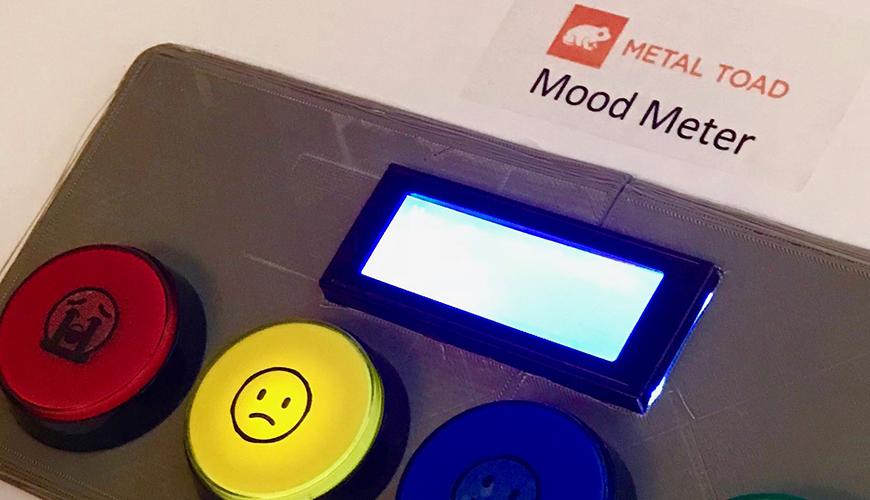 This year’s hackathon challenge was to explore the Internet of Things (IoT) using cloud technology. As a Scrum Master, I have a longstanding interest in supporting the emotional wellbeing of teams, because it’s an important element of productivity that often gets overlooked. So I joined up with four other Toads—Nick Beaird, Toby Craig, Robin Law, and Jason Swetzoff—who wanted to capture employee moods and do something useful with the data.

What we built: The Mood Meter

The basic idea for our Mood Meter was a kiosk to put in our team room. As people enter our standup meeting every morning, they can press one of four buttons to indicate how they’re feeling—from fantastic to meh. On the back end, we combine the responses with data about environmental conditions so that we can draw inferences about ways to boost team happiness.

The Mood Meter runs on a Raspberry Pi running Raspbian, wired via GPIO to four lit buttons, an I2C LCD display, and a temperature/humidity sensor. A Python script listens for the buttons when they are pressed and reacts by reporting the response (the mood), as well as the current temperature and humidity, to the Adafruit IO cloud via MQTT. The LCD screen also updates with a message showing the user how many times that button has been pressed. Another script running on the Pi pulls weather data from OpenWeatherMap every thirty minutes and records that data to Adafruit IO.

How we built it: Fun with 3D printing

The Raspberry Pi is the brain of the Mood Meter, but we also needed a body. We gathered some colorful LED buttons, then used foam board and glue to produce a really functional and attractive prototype, which looked like a real product.

But we wanted to make it even more polished, and I was really curious to finally try out our office’s 3D printer. We used a rendering software called TinkerCAD to design the faceplate, and then it was time to print it. As a digital professional, I don’t usually get my hands involved with physical materials, so it was gratifying to produce an actual 3D model solution. Our team’s collaborative and creative approach came in handy when we had to assemble all the components as well.

How we worked: “Yes-Anding” our way to success

I think our work process was the key to our team’s success. We ran into unexpected challenges throughout the project, but our process helped us tackle every blocker. Here are some of the key aspects:

The fact that we produced a working prototype that our team (and clients) can use was a huge win for our Hackathon team. I really enjoyed our collaborative and iterative approach. We broke down silos, learned from each other, and opened our minds to new ideas that we can bring to our client work.

I'll admit, I was intimidated by the technology when we started out. But after two days of hacking, I felt like we had all leveled up. At the end of the event, every one of us was ready to hit the "fantastic" button on our Mood Meter.