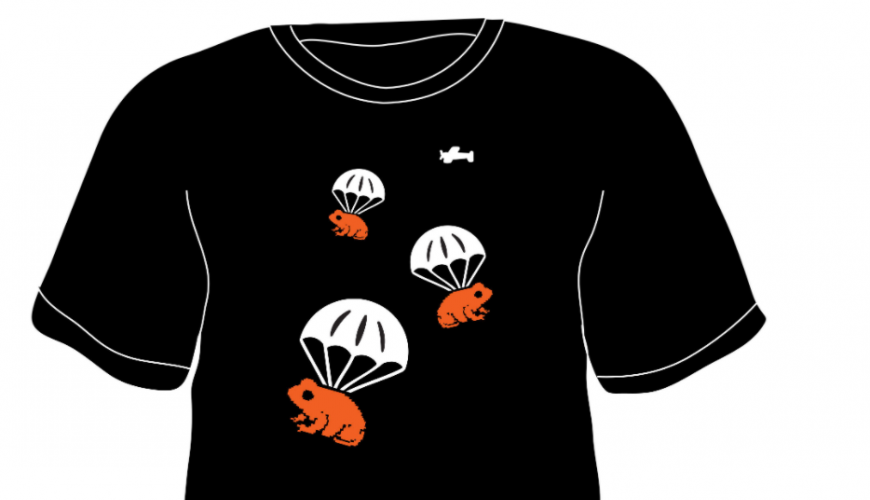 For the second straight year, Toads filled the Oregon skies. Not like in P.T. Anderson’s award-winning film Magnolia, but more like tiny dots of bravery speckled throughout the horizon. Luckily, due to an internal design wizard, we had matching shirts to celebrate the occasion and, for their part, to illustrate what our presence in the sky might look like to grounded onlookers: 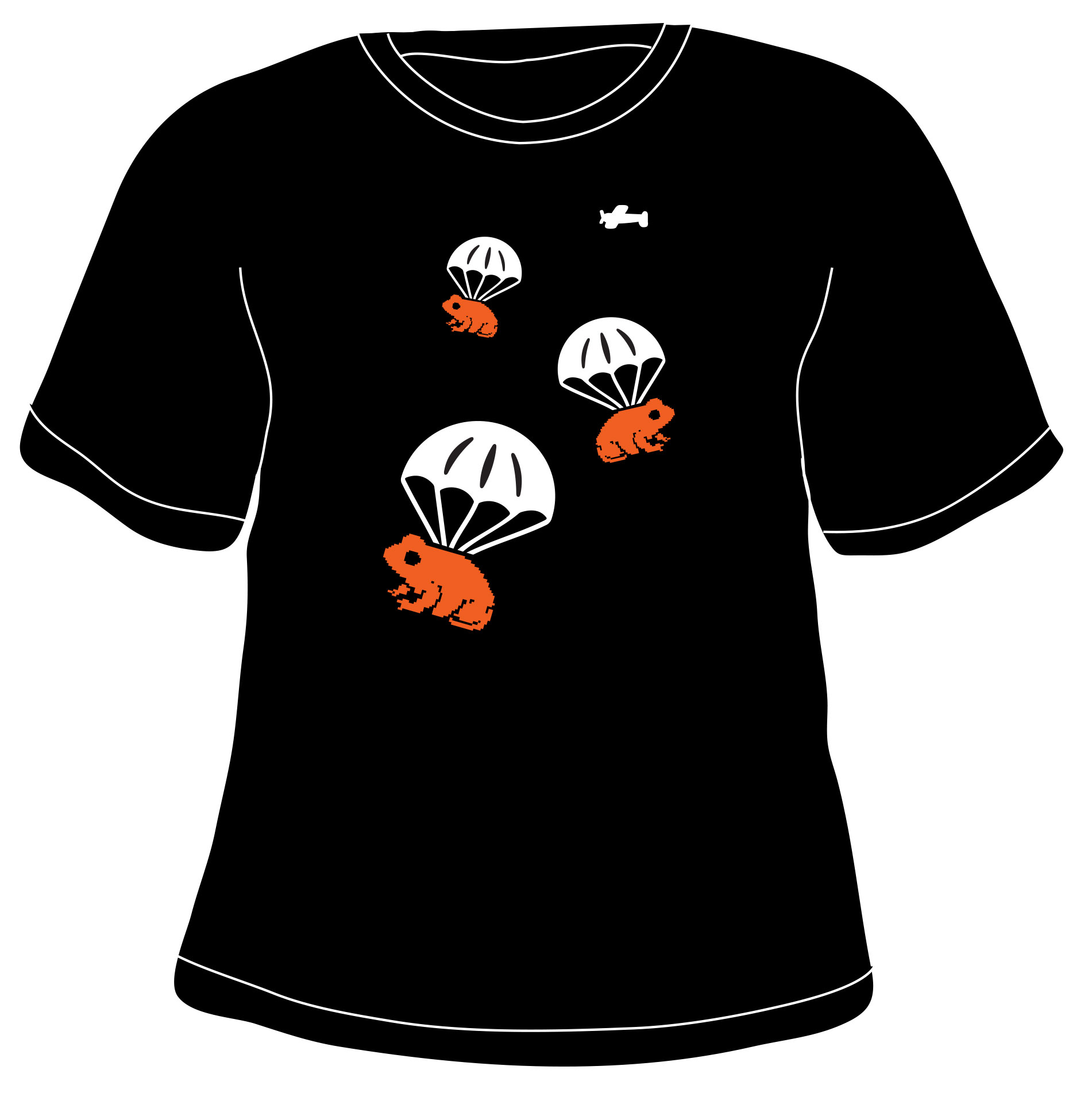 No one in my life would refer to me as ‘brave’ or ‘adventurous’ when it comes to extreme sports. They have decades of rock-solid evidence to the contrary. So when this opportunity came up, I laughed out loud when people began pressuring me to do it. Eventually, I bucked up and through my money down. Some may say that they “wore me down.” Whatever. The most important takeaway here is that I agreed to jump out of a plane at 12,000 feet above sea level.

When the day arrived, the Toads showed up at Skydive Oregon filled with mixed emotions. Some were excited. Some were nervous. Some were nonchalant. I was completely terrified. Luckily, I have years of practice using low-decibel jaunts to mask my fear and entertain others so I had the tools to get through this. I checked 78 small boxes relieving our hosts of any culpability if something were to go wrong, took my tandem training class, and got suited up.

At this point, I met my tandem jump partner, Bret. Bret was a perfect amalgamation of lifetime extreme thrill seeker and talker. He was on his umpteenth jump of the day when he came across my path and he assured me that there was nothing to be worried about….over and over and over. I’m sure I was wearing my panic on my face so he had every right to do so….over and over and over.

Then the plane rolled up. Four of our group had gone up in a previous flight and, as we were loading into the plane, we noticed the small blips of their parachutes across the sky. Though I refrained from peeing myself at this point, I figured that it was pretty much going to be an eventuality.

We embarked. The plane climbed quickly with switchback after switchback until we hit our target altitude. Fellow Toad Slavko Pesic was taking his first “A” license jump aboard this flight and he, like the other solo jumpers, thirsted for the door to open like a bloodthirsty wolf. At this point, Bret wacked the back of my head and exclaimed, “Nate! Are we jumping out of a plane today!?!” I replied with a cocky “Shit yes!” and immediately had to remember what I had just said.

The go-ahead was given, the door swung open, and our five solo companions were out the door in a flash. As the first tandem to jump, Bret and I crabwalked our way to the open door and perched on the edge. I looked 12,000 ft straight down. And I didn’t pee. Yet.

Bret then asked me to arch my back and hold solid (the standard protocol for the front person on a tandem jump). I accommodated and all I heard, “Going!” and we were in flight. Well, not “flight” per se. More like terrifying freefall. Bret then slapped me on the head again to let me know that we were flying (I had actually noticed by that point) and I relaxed, looked around, and took in the fact that I was totally ok with falling towards Earth at 150mph with a weird man strapped to my back.

I screamed until I couldn’t scream anymore. I (kind of) loved every second of it and, when the chute was pulled, we began the greatest Portland-area sightseeing tour of all time. It was an exceptionally clear day and we could see for miles and miles. From Mt. Rainer to the tiny speck that was the Big Pink, I took in the fact that I was floating above the planet and I STILL hadn’t peed myself.

The landing went smoothly and many of my Toads were there to greet me. Big hugs, high fives, and fist bumps were my reward for risking my life after waiving my guides of any responsibility for wrongdoing. Totally worth it. 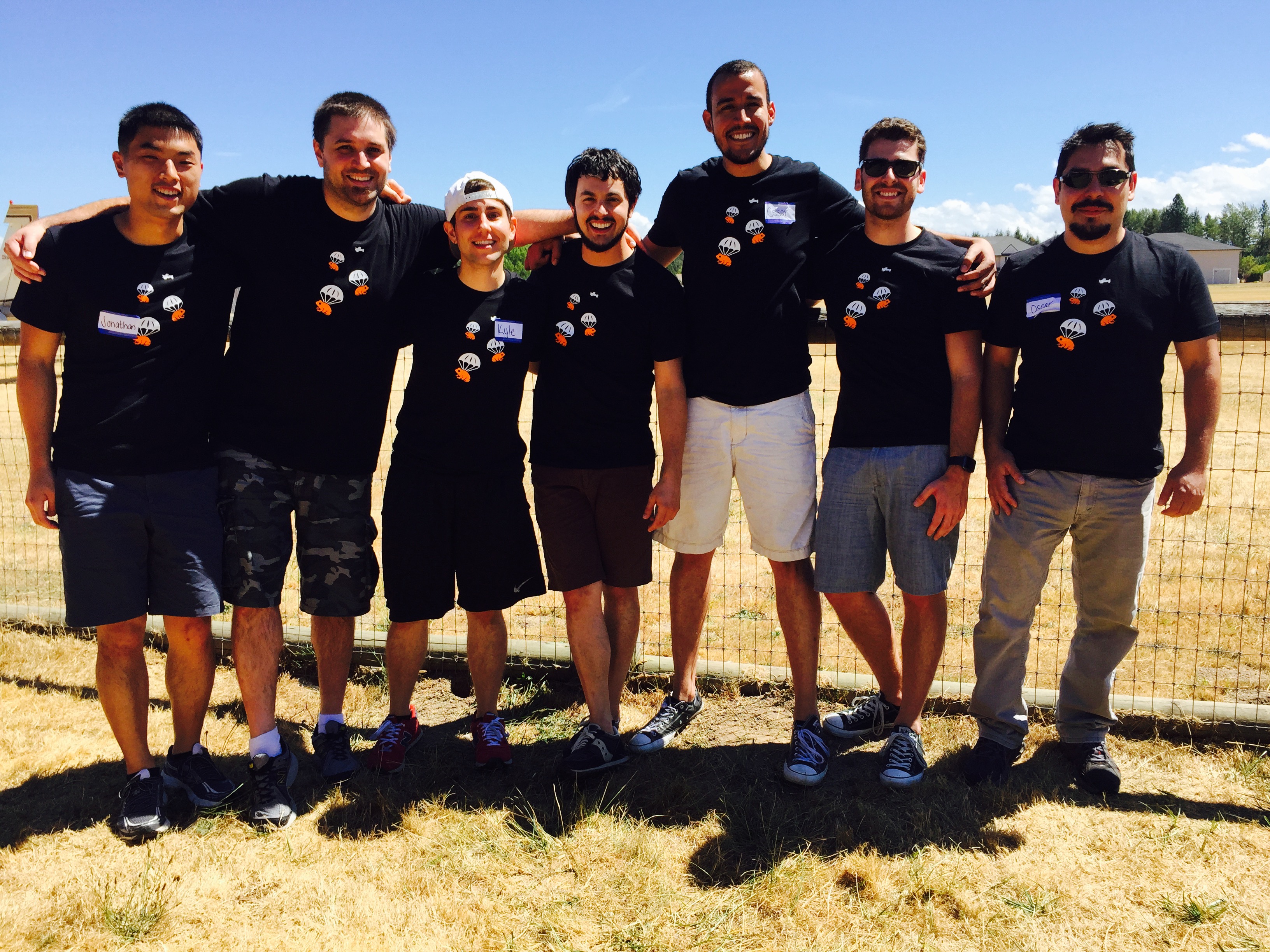 Like many of Metal Toad’s out-of-the-office social events, it started with one person’s vision of what fun could be….and then subsequently spiraled out of control. Toads enroll Toads in wacky activities of all kinds and this builds friendships that will last long after we launch projects together.

Of the many things I love about working at Metal Toad, the feeling of being part of a group friends trumps them all. Every day, coming to work feels far more like an opportunity to build something with friends than it feels like drudging through another day with coworkers.

And I didn’t pee my pants. Nailed it.