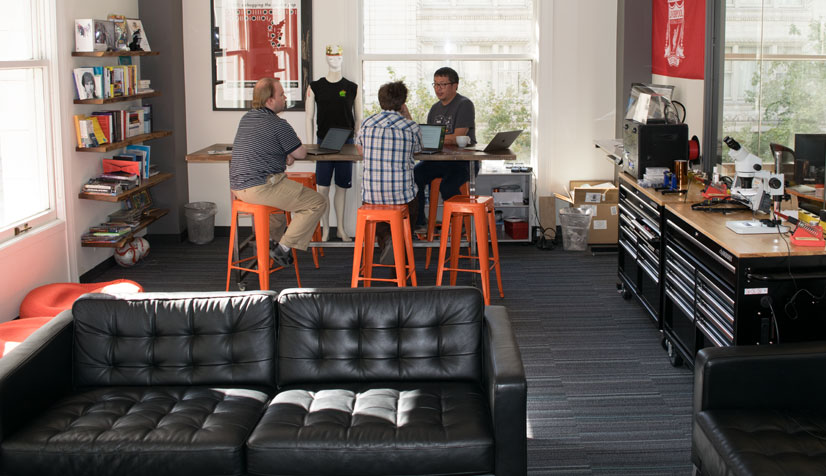 The Not-So-Secret Way Metal Toad Is Changing the Game

In the back corner of the brightly-colored Metal Toad headquarters is a small room, full of couches, a few bookshelves, stuffed with dense guides to coding in a multitude of different languages, project management, and, of course, a few miscellaneous comic books. If you stare only at the back wall, the first impression of the space is that of a breakroom. Its moniker, “The Fishbowl,” is a nod to the bright orange mascot of the medium-sized software development agency occupying the 4th floor of the Yeon building in downtown Portland.

For the last 12 years, Metal Toad has occupied a secure space in the Portland technology industry, ascending the ladder from basic marketing websites to full-scale mobile development to Internet of Things (IoT) applications and platforms, entirely custom-built for the client and their respective industry. The office where the Toads (and each employee will proudly identify themselves as such) work and play is lighthearted as an office can be, and decorated in such a way as to make even the most open of office schemes seem docile, even dull. There is bright orange everywhere, and, along with the beer and kombucha taps, there is an abundance of activities to inspire productive breaks from the daily grind. Whether it's foosball, a custom arcade gaming console, or taking a trip around the U-shaped office on one of the company scooters, there is truly, it seems, a wealth of options for everyone to indulge.

But deep in the corner of the so-called “Fishbowl” is another form of creative inspiration. It’s not quite as happy-go-lucky as a scooter, or as retro as an arcade console, but it is the most unique of creative outlets, a technology hub dedicated to one thing: complete exploration, innovation, and experimentation. It's a space created specifically to foster in-house innovation.

Aside from building up a reputation for partnering with A-list clientele (read The Golden Globes, Sony Pictures, Daimler Trucks, and American Broadcasting Corporation (ABC)), Metal Toad, it turns out, has been quietly building another side of its reputation as well. Like a lawyer moonlighting as a novelist, Metal Toad has spent the last three years building an internal innovation lab of sorts, and though most of it has been by daylight, almost all of the time spent on creating it has been pro-bono, with no expectation of any sort of ROI save the innovation, learning, and growth as a result of the free-range experimentation. The lab started out as a technical assistance lab, a tool bench for team members to fiddle with their computers, keyboards, and assorted devices. But, through Metal Toad’s annual Hackathon (described more in depth below), the tool bench slowly evolved, garnering a more specific purpose and, eventually, becoming a central hub for innovation throughout the company.

Dubbed the “IoT Lab,” this once-small and infrequently used corner of the Metal Toad office is now a bustling hub for advanced technologists and newbies with a taste for soldering and wiring. With regularly replenished collections of tools, materials, and resources, Metal Toad employees enjoy unlimited access to their very own computer science lab, complete with processes for testing and, in some cases, even implementing devices they create during their company-paid R&D (research and development) time. It not only allows for solo experimentation, but one-on-one pairing, demonstrations, and team-wide collaboration. Officially established in mid-2017 with the installation of the tool bench, the IoT Lab has become the core of Metal Toad’s latest Hackathons, each of which has centered around a different aspect of IoT. And while the lab itself remains small, the devices and ideas that have come out of the IoT Lab have the potential to make huge impact, both within the Metal Toad office and beyond.

Last Hackathon, themed “IoT in the Cloud,” featured devices all over the map, including a real-time engine efficiency device, a plant health and hydration monitor, and a life-size “mood meter,” now installed front-and-center in Metal Toad’s largest meeting space. The mood meter, a 3D printed (the lab has that, too) board with three different emoji buttons, is exactly what its name suggests: a way to measure the mood of anyone who cares to specify how they’re feeling. It's anonymous, of course, and the data collected tallies both number of selections per mood (happy, neutral, upset) and selections within a given period of time. It allows the company to see, week over week, month over month, even day to day, how employees are doing, and since its creation during a 36-hour Hackathon in June of 2018, it’s been implemented and used as a working model of company pulse.

The mood meter is just a single example of the impact that the IoT Lab has had at Metal Toad, but there are countless micro-instances that have proven the true value of the IoT Lab, not only as a place for experimentation and expansion of skills, but as a physical manifestation of the investment and trust that Metal Toad has in its employees. Spending even a few minutes listening to the huddled teams discussing their Hackathon ideas, or to a single electrical-engineer-turned-developer teaching a coworker how to properly solder wiring onto a Raspberry Pi speaks volumes about the company and its priorities.

What we’re starting to see in the world of IoT is not only an array of new devices, but a clear move in the direction of iterative, adaptable development services. Enterprise companies are shying away from the waterfall methodologies of the past, and looking for teams to offer guidance, expertise, and experimentation to find the best product possible. The shifting priorities and technical needs of clients are demanding that developers not only be experts in their language and products, but in the field of advanced technologies as well. The demand for IoT and machine learning has barely scratched the surface of its peak, and the companies that invest in the learning and growth of their teams will no doubt be better equipped to handle the requests for products of the future.

Even in an era where tech companies are vying to become the next Amazon acquisition, Metal Toad has demonstrated its commitment to put its money into the people that have driven this agency to success over the last 15 years, and the IoT Lab is simply the latest investment on what has proven to be a sparkling path to success. With the in-house innovation at an all-time high, Metal Toad is on a trajectory to be a major player in the tech space for years to come, while still maintaining its focus on the people-centered values that have highlighted the company culture since its inception.