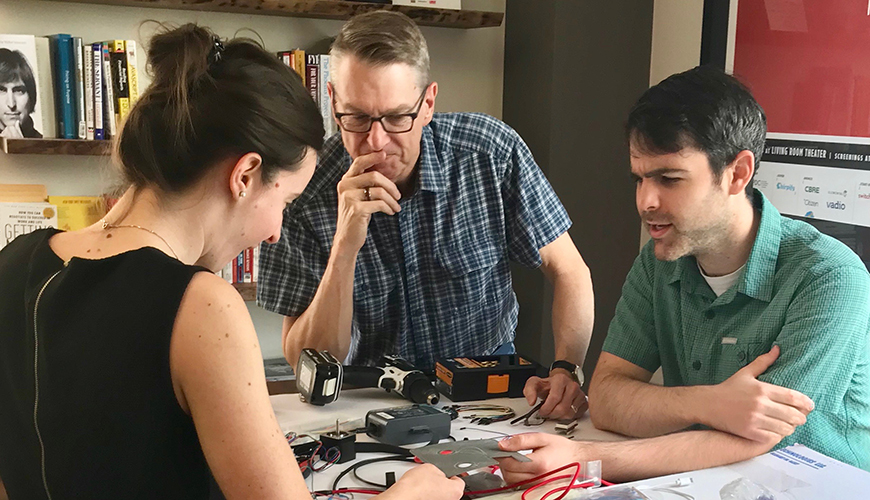 Developing leading-edge digital solutions requires serious development muscle, hard work—and taking time to innovate just for the fun of it. That’s why Metal Toad—the Portland agency dedicated to transforming the digital landscape—held its semi-annual hackathon this June to delve into the Internet of Things (IoT). For two days, the Toads (as employees affectionately call themselves) set down their day-to-day work to tinker with IoT technology.

The goal of the event was rooted in the company’s core values, particularly putting into practice the commitment to curiosity, providing value, and delivering great experiences. Solving problems together in order to deliver great client results is at the heart of the company’s work, and staying up-to-date on emerging technologies is foundational to helping clients. The hackathon gave the team a chance to experiment with the latest in IoT tech, including:

Each of the five teams took a different approach to connect the physical and digital worlds with IoT technology.

Team The Hackening went after the ultimate nature-to-net connection: a plant monitoring system that senses light and moisture levels, visualizes the data in an easy-to-use interface, and even adds water as needed. The keys to the project were Arduino development environments and the visual representation of data in real time. Check out their blog post for a deep dive into the project.

Another team, Moodmeter, sought to translate human emotions into digital data. With the premise that happy employees=more productivity, they built a kiosk to capture anonymous employee feelings and atmospheric data, which leaders can use to drive positive organizational change. Find out how they employed Adafruit IO, Python, and more in their blog post.

The Merry Martins team took their project outside—more precisely, to the parking garage. They holed up in a 2013 Dodge Caravan and a 2016 Kia Soul to create a system for capturing on-board diagnostics, sending the data to the cloud, and visualizing the information in ElasticSearch. Their blog post details their project (and how they nearly broke Nathan’s van!).

Team Kegerator focused on a problem near to their hearts: keeping tabs on the amount of beer left in a keg. Their project relied on Flowmeters and Raspberry Pi Zero to deliver real-time monitoring of keg levels, represented onscreen by a pint glass whose beer level reduces as the keg is tapped—vital info for any hopping craft-brew tavern. Fill up on details in their blog post.

In addition to providing a lot of fun, squad bonding, and plenty of goofy hijinks, this year’s hackathon demonstrated the Metal Toad team’s ability to push the limits of emerging IoT tech. As a dynamic group dedicated to coding the digital future, these opportunities to experiment help the Toads envision new and exciting ways to solve their clients’ most pressing business problems.