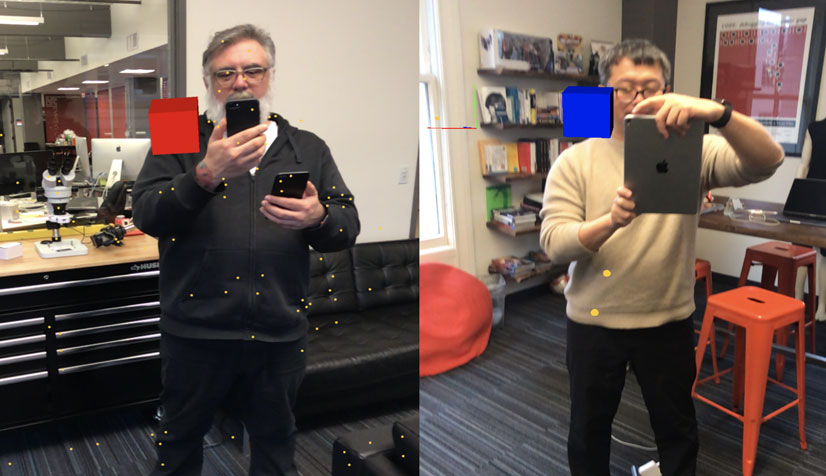 What if you could make the impossible a reality? That’s the promise of augmented and virtual reality (AR and VR)—this emerging tech has the potential to redefine our clients’ business landscapes and, indeed, their entire industries (and maybe the whole world!). That’s why the Toads were excited to explore how AR and VR can push the boundaries of what’s possible at our most recent hackathon.

Metal Toad’s bi-annual hackathons are 48-hour innovation intensives that give Toads a chance to flex their development muscles in a fun, collaborative environment. Not only do AR and VR hold tremendous promise for every industry, they also represent some of the biggest engineering challenges—and the Toads were eager to rise to the occasion.

As CTO Tony Rost notes, “This technology was the most challenging of any hackathon we’ve ever done, and yet at the end I saw more confidence than ever. It’s very impressive.” Indeed, there were lots of cheers and gasps of amazement from judges and peers alike at the final presentation dinner, where each team revealed their project and results.

Team Knock-Knock (Nathan Wilkerson, Oren Goldfarb, and Vaughn Hawk) used AR to address something we can all relate to. As Nathan says, “I’m really bad at remembering names, so I wanted to build something to help with that.” So they created a device that uses a camera to identify a person, then automatically speaks that person’s name and job title. The final project wowed the audience: after seeing it work for the first time, Tony immediately jumped up from the judges’ table and cried, “That’s amazing!”—them promptly tried it out on himself and several other Toads.

Team AR Treasure Hunt (Kalina Wilson, Brad Kouchi, Chris Hanson, Toby Craig) set out with a clear strategy: aim for an approachable MVP so they’d have time to have fun with the accompaning story. They created a pirate-themed treasure hunt game (“putting the AR in yaARr,” as the team likes to say), which cleverly uses a QR code scanner instead of a standalone app. They learned a lot along the way—especially when they made a 3D model of a Toad and, upon testing it, found themselves “inside” the body of their Toad—and used the technology to tell a compelling story.

While other teams worked on AR projects, Team Whack-a-Toad (James Simshaw, Ron Shafii, Daniel Mesquita) went completely virtual with a whack-a-mole-style VR game. Although they had little experience with VR, they learned quickly. Daniel notes, “We spent the entire first day looking at just one bit of source code. But once we got that figured out, it really flew!” Like the treasure hunt team, they discovered the difficulties of 3D modeling when they also got lost after making a virtual Toad. James notes, “We had no idea where we were until we saw the other team’s Slack messages and realized—we were also inside the toad!”

A hackathon isn’t a hackathon without a project that goes off the rails—as Team AR Dumpster Fire discovered. The team (Robin Law, Phil Tseng, and Lloyd Briggs) set out to make a multi-player AR game. Although their goal turned out to be too ambitious for the timeframe, they created three cool components: an AR ball controlled by a mobile device’s accelerometer, a multiplayer function in which two tablets share an AR world, and an object-spawning engine that, when demoed at the presentation dinner, filled the room with an avalanche of chairs, coffee cups, and bagels. Even though the team felt their final project was a bit of a dumpster fire (hence the name), they learned a lot and had a blast.

Team Wayback Hackers (Morgan Senkal, Cat Janowitz, and Marri Gamard) based their project on a long-time idea of Morgan’s: “I often wish I knew the history of the cool old buildings I see as I walk around Portland.” So they created an AR app that displays interesting historical tidbits as you look through your phone’s camera at nearby structures. One key to their success was keeping the scope attainable, as Cat notes: “I feel proud of us for making a bite-size MVP that really works. It’s easy to overreach, but this way we have something we can build on.” In fact, several Toads have asked the team to create a full-fledged version of the app, and the team plans to flesh it out with more features in their upcoming R&D days.

After all five teams presented their projects, the judges conferred and handed out awards—with Team AR Treasure Hunt taking home first prize! But even though the event had the element of friendly competition, every team received kudos (and prizes) for their impressive work. As CMO Donna Schultz noted at the prize dinner: “One of the reasons I love Metal Toad is that I see all of you facing tremendous challenges—learning a new language, trying a new technology—with so much confidence and curiosity. It builds my confidence that when our customers need innovation, we can do it, and do it well.”

In the end, the hackathon not only gave Toads a chance to try new technologies and wow each other with their ingenuity—it also highlighted the Toad value of collaboration. As Tony summed it up after handing out awards: “This whole event has really captured the spirit of Metal Toad. You’ve all been tremendously courageous and supportive of each other—and that’s the spirit we draw on for all our work. This is what it means to be a Toad.”