by Ben Teegarden , Developer
Filed under:

I recently spent some time fighting against the Drupal Media and File Entity modules in order to upgrade them from version 7.x-1.x to 7.x-2.x. (To be specific, Media was upgraded from 7.x-1.4 to 7.x-2.0-beta1, and File Entity to 7.x-2.0-beta2). Through this post, I will share with you my trials and tribulations, with the hope that one day no one else will endure the pain and suffering that I have endured. This is one of those situations where ultimately there was not that much that needed to be done, but a lot of time was spent on trial and error.

Based on all the comments/documentation I've seen around this upgrade, it seems like everyone's experience differs slightly. I assume that is because everyone is updating from and to slightly different versions of the Media module. Complications can also arise from modules that are dependent on the Media module. The site I was working on uses the Media Crop module which, as it turns out, is not yet compatible with Media 2.x (at least at the time of writing this). Luckily our client was not actually using the functionality of Media Crop and didn't mind losing it. Unfortunately though, simply uninstalling Media Crop seemed to leave some traces of the module on any images that were added via a WYSIWYG editor (Image styles referencing Media Crop, CSS classes and strange markup). This seemed like a rabbit hole I did not want to go down so I was happy to find that applying this patch resolved the rendering issues I was having. For whatever reason, the actual crop functionality is no longer accessible from the WYSIWYG but at least the upgrade does not destroy the rendering of current images. If you're using the Media Crop module I would recommend applying the patch before updating Media.

So, with encouragement/prodding from Keith Dechant, I decided to write a Bash script to carry out the tasks of the actual upgrade:

The script is probably mostly self explanatory, but I went a little comment happy anyways. I ran this script on my local environment (many many many many times). You do not want to run it on a Production site because you will probably need to do some modifications to get it working for your situation. Once it is ready, you should export the Production database down to your local environment, get the site up and running, and then run the script. Next, export your local database and import it to Production. The first thing that the script does is disable modules that are dependent upon Media or File Entity. You might need to do a test disabling of Media and File Entity to note which other modules get disabled. Make sure that you add these modules to the reenable part of the script. Since we use Features, there were also some Features that listed Media or File Entity as a dependency and so I disabled them as well.

Media 2.x and File Entity 2.x also create a few new permissions that need to be set. If you use this script, be sure to replace our roles with roles that are relevant to your site. Also, some permissions provided by previous versions of the modules have been removed. If you save permission configuration in Features you might need to update your Features after upgrading.

After running the script I still found that images added via WYSIWYG were not rendering correctly. There was now extra markup around images that was causing styling issues, and links were being removed from around images. I struggled with this for a while until I happened upon an obscure comment somewhere deep within the bowels of Drupal bug tickets. For reasons unknown to me, Media 2.x has changed the markup around images. However, there is a simple resolution to this in the Media module config: Go to /admin/config/media/browser and check the box "Legacy rendering (using field attach)" and your markup will be as it was before upgrading.

While we're talking about obscure configuration, make sure that your text formats have the "Convert Media tags to markup" filter enabled. 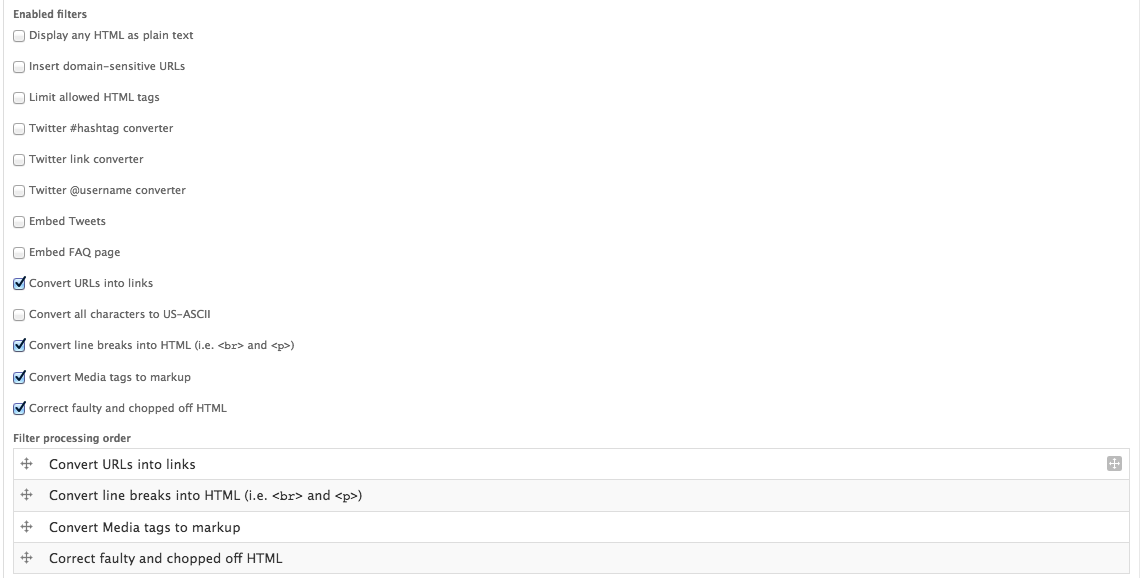 Hopefully I didn’t forget to mention anything major and I hope that this is useful to someone out there. If you find yourself here because you are trying to perform this upgrade: good luck you brave poor soul.

This was also a useful reference:
http://justmagicdesign.com/blog/201507/updating-drupal-7x-websites-media-1x-media-2x

Thanks for what looks like a very well written step-by-step guide for this process.

I noticed that as of April 6, 2017, there is some type of security patch / warning / upgrade notification (the "Release Notes" link in the security notification points here: https://www.drupal.org/project/media/releases/7.x-2.0)

As far as you know, are there any wrinkles to the process after this notification was issued?
Thanks!

I had issue with upgrade not showing thumbnails. The following sql query fixed it for me:

select * from file_managed
where filemime LIKE "image%" AND type != "image"