Let's visualize and talk about the "full stack" of web development. From a developer's standpoint, we're probably talking about the layers of code involved in delivering a website to an end user. But let's back up further for a moment and just talk about a stack of things. Given all the different device, language, and application options out there, many stacks of things in this case! There's the stacks involved for phone application development, stacks for websites, stacks for console gaming, and more! To avoid head explosions to the extent possible possible, I'm going to focus on Metal Toad's most common stack.

I'm hungry, so I'm making my stack a bit bigger than just code layers. What I'll attempt to illustrate and explain is the most important layers involved between a web developer and a website visitor, both on their computers. I'll touch on people, software, hardware, languages, concepts, and more in order to provide a fairly holistic view. Much of this stuff (at least on the surface level) isn't as complex as the terminology and acronyms may make it sound. Realize that there are hundreds of intermingled components that this doesn't touch on; if you want the overview, read start to finish, or if you want to get more in-depth, start clicking the links to Wikipedia and beyond. Feel free to call me on any technicalities or suggest changes/additions in the comments! There's a lot of info to cover, so I'm going to break it down into three posts, with this being part 1. If you prefer, you can read the long-form post with all the content in one. 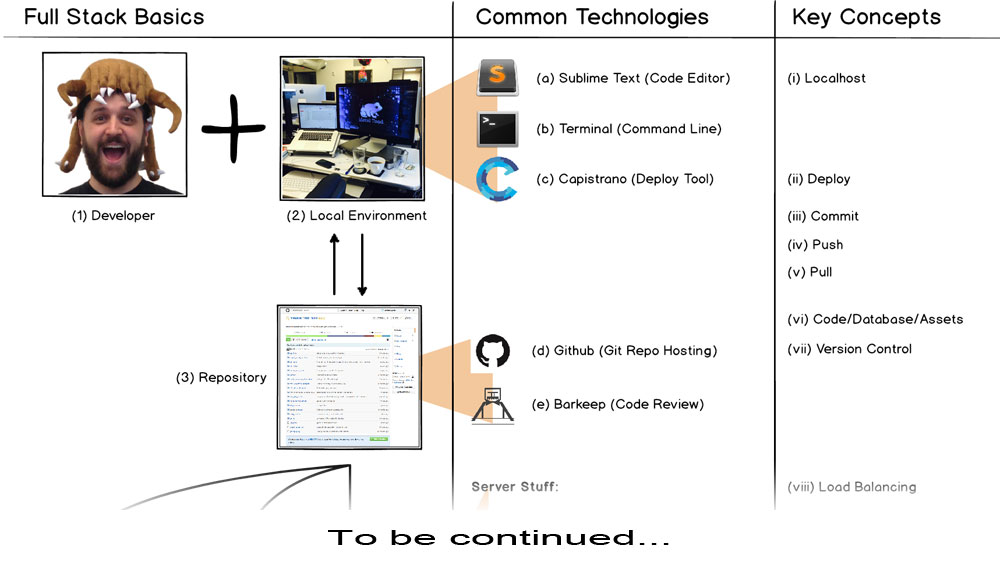 View/download a full-size version of the complete chart here to follow along.

A developer gets to sit down (or stand up) in front of their desk and build a website. Pretty straightforward here, but note that while some level of knowledge of the full stack is necessary for development, true full stack developers that can write and deliver code from top to bottom at a senior level are rare. Many have a focus in one of three areas (which we'll touch on further below): frontend development, backend development, or devops. A developer will spend much of their time learning, writing code, configuring applications, testing their work, and deploying what they've written.

A local evironment (AKA (i) "localhost" in networking, AKA "local machine") is just a developer's device (laptops in Metal Toad's case). We configure them to develop, test, and deploy websites (AKA "development environment"). These machines are set up with all of the applications installed that make up part of the website's stack so that a developer can write code, deploy it on their own machine, and pull it up in their browser to test and review before committing their work to a repository. Some technologies involved are:

A repository is simply a storage location. When the term is used in relation to websites, it generally refers to the organization and storage location for the website's source code files. For most dynamic websites, there are three main components involved: (vi) Code, Database, and Assets.

A complex website is comprised of hundreds if not thousands of source code files. Managing them all can be confusing and tedious on a one person project; add in multiple developers working on the same code base and a code management system is crucial. This is where (vii) version control comes in. Just like you may be used to creating and managing multiple copies of a draft design PSD or working in Google Drive with multiple collaborators and revisions, version control allows for creation of a revision history and multiple-user collaboration on a shared repository. For version control and repository management, we use (d) Github, which is based on Git. Github is a web-based Git repository hosting service that provides a GUI interface for repository management and source control in addition to command line use.

When it comes to version control and Git specifically, there are a number of terms that you've likely heard mentioned that warrant basic definition:

With developers regularly committing and pushing changes in a repository, one more important piece of the puzzle is developers giving each other feedback on their work. This is where (e) code review comes into play. For code review we use Barkeep, a system that integrates with Git to allow for seamless peer review and feedback on code while in development.